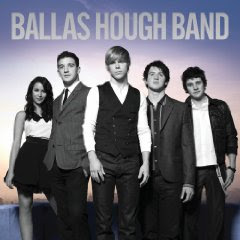 I was recently given the opportunity to review the Ballas Hough Band debut CD titled BHB. Anyone who's given ABC’s hit show Dancing With the Stars even a passing glance knows the names Mark Ballas and Derek Hough.  DWTS is, after all, required weekly viewing for over 18 million people!

Since 2006, the two professional ballroom dancers have both led their partners to victory, and the fabulously coveted Mirror Ball trophy.  Mark claimed the trophy in season 6 with Kristi Yamaguchi, and Derek and Brooke Burke were the winners in the 7th season of the show.  This season, Derek is dancing with multi-platinum artist Lil' Kim and Mark's partner is Olympic gold medalist Shawn Johnson. But entertaining audiences has never taken just one form for Mark or Derek.  They may be known for their dancing prowess but the two best friends have been playing and making music together for more than a decade!

Music of all forms constantly filled the Ballas' London home where Derek grew up with Mark, so it was only natural. And, like every achievement they've crossed off their collective to-do list, a career in music was a dream they worked towards tirelessly. Ballas Hough Band was signed to a record deal with Hollywood Records last summer, and their highly anticipated debut album BHB debuted on March 10th!

Mark and Derek wrote over half the songs on the album.  The first single, “Do It For You” makes for the perfect introduction to the band's pop sensibilities and was co-written by the new American Idol judge Kara DioGuardi. From Maroon 5-flavored “Devastated” and “She Was The One,” to intricate guitar-work, wistful harmonies, tug-at-your-heartstrings melodies and lyrics that read like the love letter every girl dreams of in “Longing For,”Ballas Hough Band credits a diverse range of influences — from Michael Jackson to Prince, Queen, and even Nirvana.

For the last two months, Derek and Mark have been traveling the country as featured dancers in the DWTS winter tour, working double-time with the Ballas Hough Band, playing select club shows alongside the tour.

Check them out on their video channel for a sneak peek and make certain to follow the band on Facebook and MySpace for news and tour information! Visit the official Ballas Hough Band site or purchase the album here on Amazon for $11.99.

Thank you One 2 One Network for the review opportunity!

Sunset of Summer ~ Take Summer with You

Summer 2014 with Alamo has been great. I have had such a fun time as part of Alamo's Chief Travel Moms as we’ve helped moms plan, experience, and capture great travel moments along the...

END_OF_DOCUMENT_TOKEN_TO_BE_REPLACED

“Did you know that the average 4 – 8 year old eats 21 teaspoons of sugar per day? That’s like eating 6 ½ lunch boxes full of sugar per year! My children love juice...

END_OF_DOCUMENT_TOKEN_TO_BE_REPLACED

I am a lover of books. I have been reading since the age of three and pretty sure that I have not stopped since. I love delving into a new story and learning more...

END_OF_DOCUMENT_TOKEN_TO_BE_REPLACED

Need capital for your small business? Borro can help!

As a small business owner, there are many challenges and risks that I take each and every day. I love the freedom of working for myself and with my husband. However, I often have...