However, with our children, we wanted them to ask us for technology. Ask us and really want the tablets or iPod's or whatever seemed most interesting to them. As a result, we have three children that would rather play outside any day over any type of video game.

Don't get me wrong, they still play with technology. They just don't beg for it or take it everywhere with them.

One of the things that worry me about my  youngest (she is 5) is that she desperately wants to be just like her older siblings. Giving her a tablet scared me because I honestly had no idea what she would do with it. What websites she would try to visit.

Then we the VINCI tablet arrived.

ABOUT THE VINCI TABLET

VINCI provides technology-assisted Learning solutions for home and school. Designed specifically for young children to help them achieve academic success, VINCI education programs, which include award winning VINCI Curriculum and Devices, guides for parents and teachers, allow parents and educators to follow a play-based learning structure to prepare children for a world of challenges and opportunities.

The three levels of VINCI Curriculum, including The Curious, The Confident, and The Capable, are especially tailored to accommodate the different aspects of a child's developing mind by helping her/him build Thinking Skills; Social & Emotional Understanding; Language & Literacy Abilities; Math & Logical Reasoning; Science; and General Knowledge.

So what do we think? While I wouldn't call it obsessed, I would call it love. My daughter brings her tablet everywhere with her. And I mean everywhere.

The picture above is my daughter playing with the tablet. She was home sick from school and playing on her tablet was the only thing that brought a smile to her face all day. She can do everything on her tablet. There is no frustration like when she plays on her brothers iPad. On the iPad, she finds that she has to stop or exit out of programs because she doesn't know what to do.

I love that out of the box, I didn't have to figure out what was appropriate for her and what was not. Everything was perfect for her. When she is frustrated with other games on her brother's iPad, she frequently brings it to me asking me to help her. This doesn't happen with the VINCI tablet.

Instead I go to her and ask her to show me what she is doing. It is amazing to me how much she understand and how well she is doing. All of this is because (well besides being a genius) the VINCI tablet was made just for her.

The tablet-based learning system created by VINCI for the early years of childhood education is reasonably priced and can be found Toys R Us for $199.

We were provided with a tablet for review purposes.

Next Post »VINCI Tablet – For The Curious, The Confident, and The Capable Child @VINCIGenius

Family Safety For All Generations

My informative friends at UL (Underwriters Laboratories) offer some great content in the way of safety when it comes to your family. Contributed by UL. What's a person to do when faced with dual...

END_OF_DOCUMENT_TOKEN_TO_BE_REPLACED 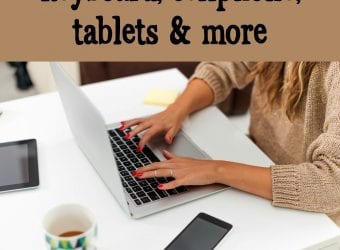 How to clean a computer keyboard, cellphone, tablets & more

We live in a world where everything is digital and electronic. We are all constantly on our smart phones or tablets and our laptops as well because we can do pretty much anything and...

END_OF_DOCUMENT_TOKEN_TO_BE_REPLACED

The Rowenta DW8080 Pro Master 1700 Watt Steam Iron with 400-Hole Stainless Steel Soleplate watts of power that easily handles any ironing task or project in need of completion. The Pro Master has a metal heat...