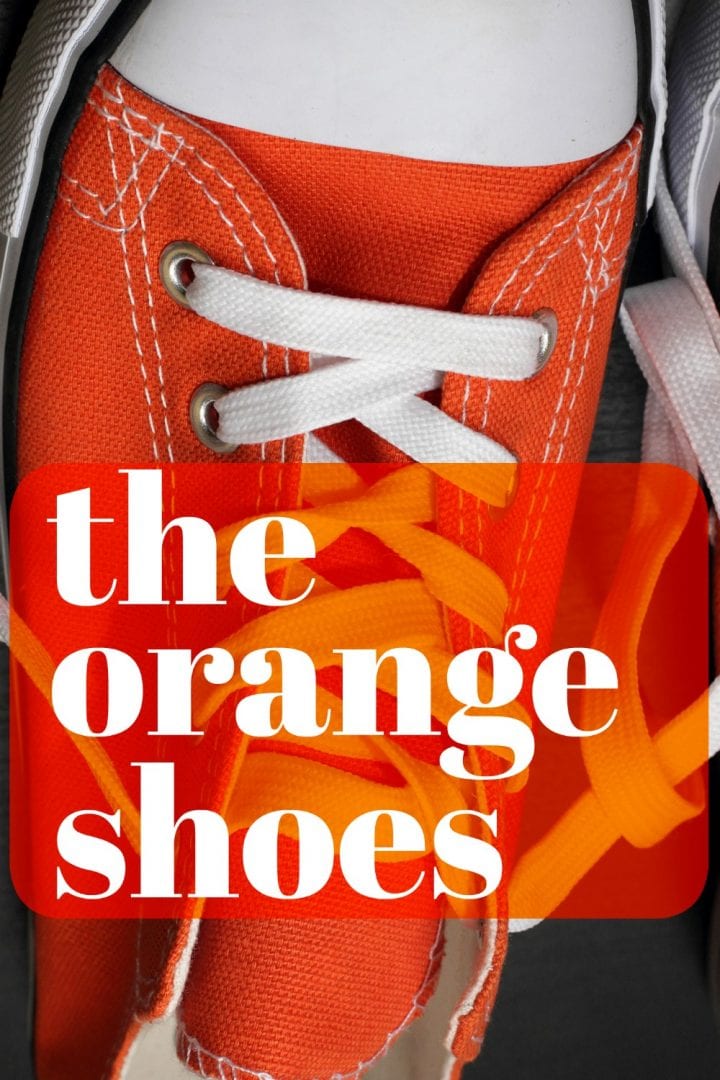 We didn't have a lot of money when I was growing up. We weren't poor exactly…

We were fed and clothed and took the yearly family road trip. But what we did buy we were stuck with for a while. There were no do-overs when it came to clothes or shoes.

I remember my dad taking me shopping because softball season was starting soon. Cleats were part of the required softball uniform and I am  sure that we ended up at Meijer's that day to get the essentials. We were living in Michigan at this time (I was born and spent the first 12 years of my life in MI).

I remember suffering through the endless grocery shopping that needed to be done just so we could just get to the aisle that had sports equipment. Finally we made it.

And suddenly in that never-ending sea of black, I spied a flash of orange. What was this? I gingerly retrieved a pair of orange cleats. The last pair they had (or maybe the only, I will never know).

They were different. They were beautiful! It took me at least 20 minutes to convince my dad to let me get them. He must have somehow channeled his inner sixth grade girl because he surely tried 100 ways to reason with me and convince me to go with the black….At least 100 times. He must of known what was to come.

But I was having none of it. I wanted those orange cleats. It must have been fate that they were in my size. I was determined. They were the coolest shoes I had ever seen, I probably thought to myself. I really had to have them.

So like any father who loves his daughter and supports her sixth grade independence, he threw them in the cart. And of course I quickly took them back out and carried them all the way to the checkout, much like one would carry a newborn baby.

I couldn't wait for the first practice.

The day finally arrived and we all suited up. I heard some snickers in the locker room but it wasn't until I made it to the field that someone said the words that have stayed with me the rest of my life, “Those are the ugliest shoes I have ever seen.”

It was as if a dam broke in tweenland. I was teased mercilessly….made fun of constantly. I would do everything I could to leave those orange cleats at home and not wear them to practice or games. I was benched for wearing tennis shoes after “forgetting” my cleats at home. I would even play sick from school so I didn't have to go to practice.

I attempted to take a marker and color over them several times but we had no Sharpie(s) back then. The marker washed off at each practice, exposing the orange glow.

I may have failed to mention earlier that this was at a Catholic school where there was a clear division of class. Those that had money and those that (we..us…me) did not. We wore uniforms to school and while there were not many opportunities to be different, you still knew who had money and who did not from our clothing. This scholarship student only wanted to fit in at the time. And as a lower income, sixth grade girl teetering on the brink of puberty, fitting in was not all easy for me.

Those orange cleats made my life hell for as long as my feet fit in them. Each day I grew to hate them a little more. I let some girls whose names and faces I cannot even remember now convince me that I now hated something that I was immediately drawn to….something that I had absolutely loved.

To this day I am still annoyed with myself for all those unresolved feelings about the orange cleats. To this day, I really don't like the color orange; but I am a shoe and clothing lover. I hoard shoes. Beautiful, well made shoes. None of them orange, mind you, but I love me some shoes nonetheless. 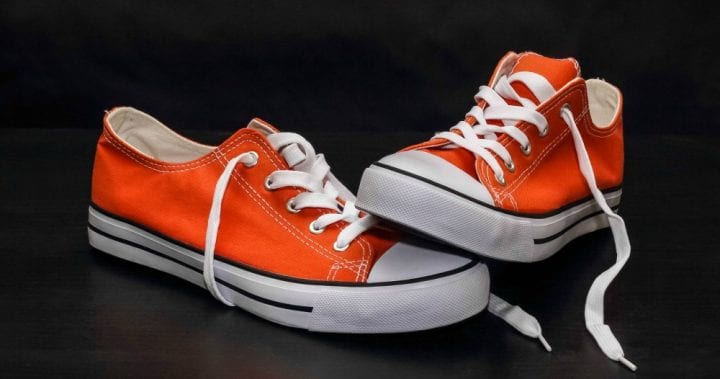 Today I took my son shopping for shoes. He is eight going on 16 and has definite opinions on what he wants to wear. We let him pick out the majority of his clothing. Well from his closet anyway. I enjoy seeing his personality shine through. In fact, I love it!

He needed tennis shoes and ran off to the section with the boys tennis shoes. Have I mentioned his favorite color?  Orange… bright, glowing, beautiful orange. I see his little head poking over the rows going down shoe by shoe. Looking at what was available and weighing his options.

Finally he screamed, “I found them. I found MY shoes. I LOVE THEM!”

“Try them on first and then come show them to us” I say to him over the rows as I help his sisters find shoes.

He comes running over, as fast as he can, a little out of breath and says, “LOOK AT HOW AWESOME THESE ARE!!!!”

And for just a few seconds I have a flashback….a bad flashback.

The look on my face must have startled him because he said, “What's wrong? You don't like them?”

And his face fell.

I had to stifle the urge to tell him to get what everyone else is wearing. To get what all of the little boys at his school wear. I saw those kinds of shoes everywhere. But I bit my tongue instead of telling him to go with the pack.

Because the pack is crap.

Because if someone is going to make fun of him for the shoes he wears, then that someone doesn't deserve to be his friend or a part of his life.

Because my son is creative. He is intelligent. He is wonderful. He is just an all around fabulous kid. I could gush for days.

So I did what I had to do. I knelt down, looked him in the eyes and said, “These are about the coolest shoes in this entire place. I cannot imagine a more perfect pair for you. Mommy was just having gas pains.” I smiled and I meant it. I ruffled his hair as he took off to run around.

“I am pretty sure that these shoes make me run much faster” he said excitedly.

I am pretty sure I just did the right thing I thought to myself.

And I am seriously considering getting myself a pair of orange shoes.

« Previous PostCarbonite Backs YOU Up!

END_OF_DOCUMENT_TOKEN_TO_BE_REPLACED 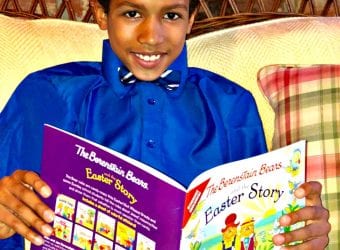 The Berenstain Bears and the Easter Story

END_OF_DOCUMENT_TOKEN_TO_BE_REPLACED 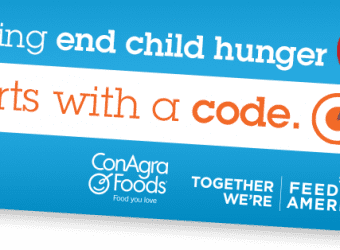 I was asked to participate in the #FacesBehindHunger campaign, sponsored by ConAgra Foods. Although I have been compensated, all opinions are my own. I didn't grow up hungry. What I mean by that is...

END_OF_DOCUMENT_TOKEN_TO_BE_REPLACED

Summer has just begun and it won't take long for the little ones to start bugging you with the dreaded…. “Mom!!! I'm bored!!” So what is a mom to do? We all remember the...