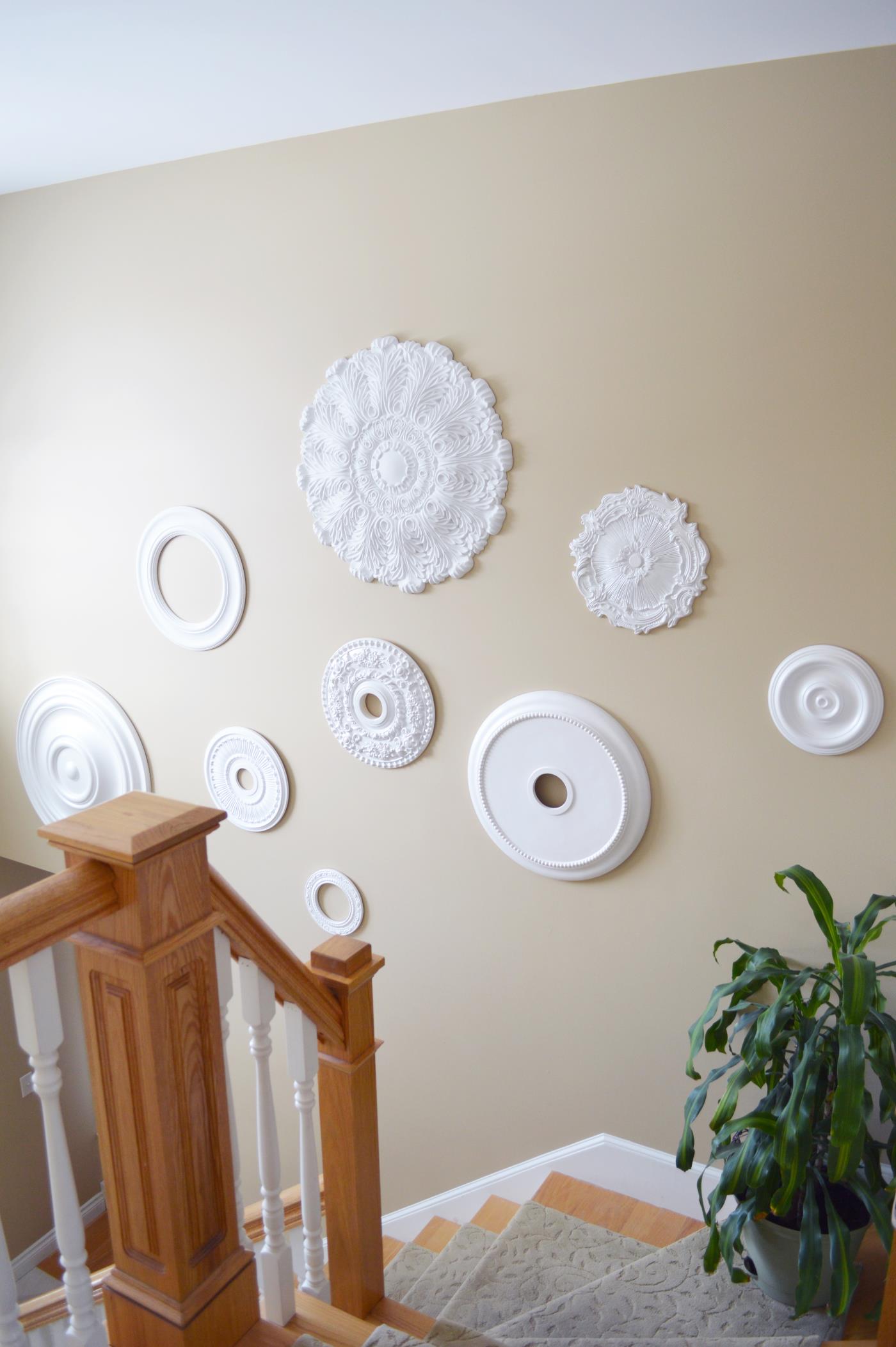 This is a projected I’ve wanted to do for years, it took a little convincing to get my husband on board, but we are both thrilled with how this collection of medallions fills a once huge and bare space. If you order the medallions ahead of time, this project can easily be done in a weekend. The two parts of this project that took the longest for us were deciding which medallions to order and then what we wanted the layout to be. We hope that you love our DIY EASY Medallion Feature Wall. 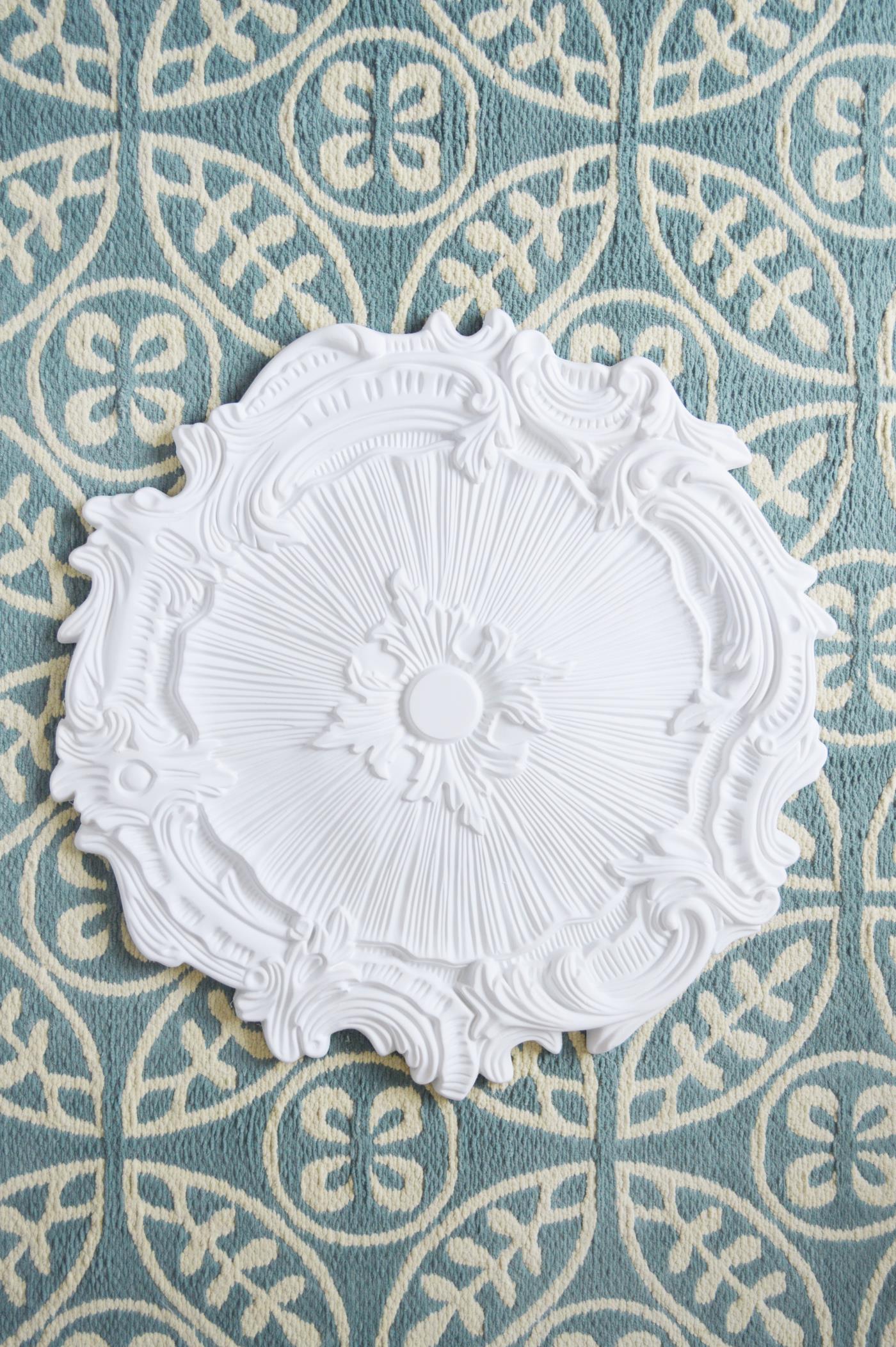 We didn’t want to cover the walls with a ton of nails and not all of the medallions had places that would make it easy to hang them from a screw or nail. We still needed to nail one and then add a picture hanging piece to the back of another (we got that at a local hard ware store and then carved out the medallion to fit the piece), but were able to use this is the Low Profile Velcro Tape for all the rest without nails. 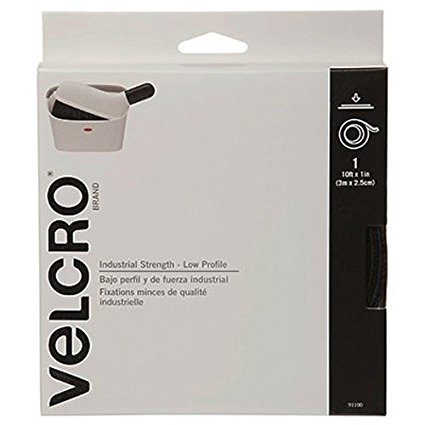 These are the exact pieces we ordered through Amazon, most with Prime shipping. We tried to pick a few nicer focal point pieces and a range in sizes, keeping the overall size of the wall in mind. 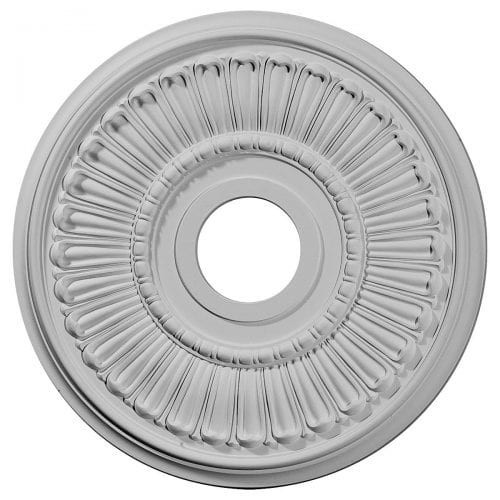 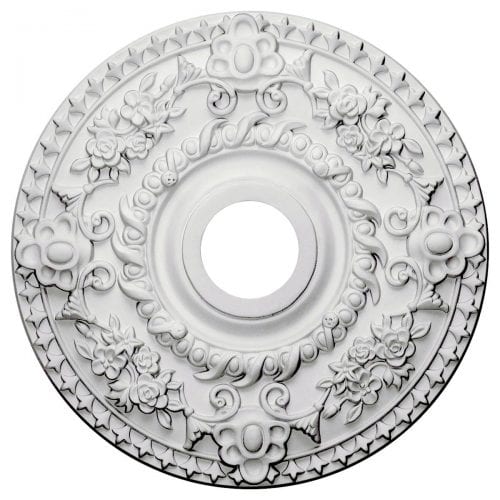 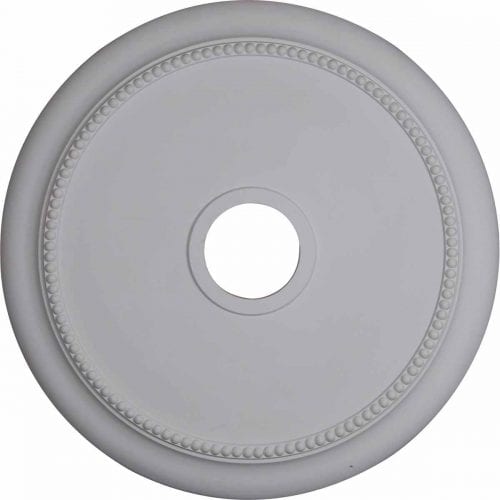 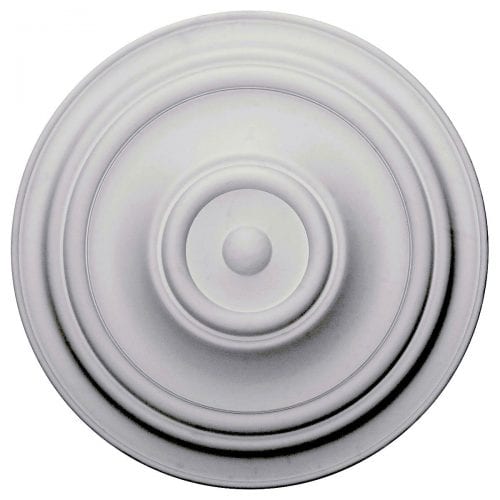 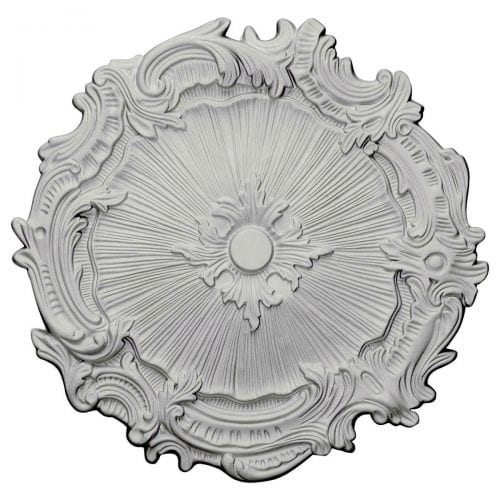 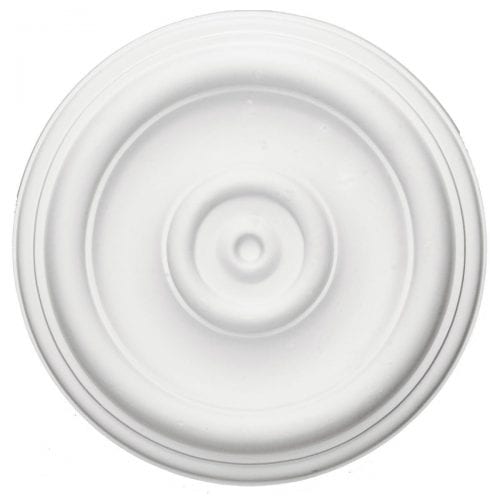 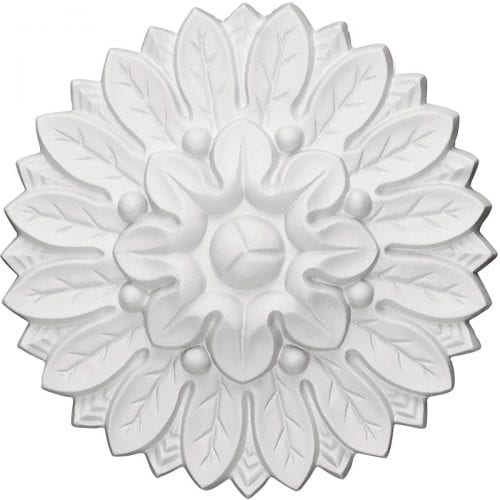 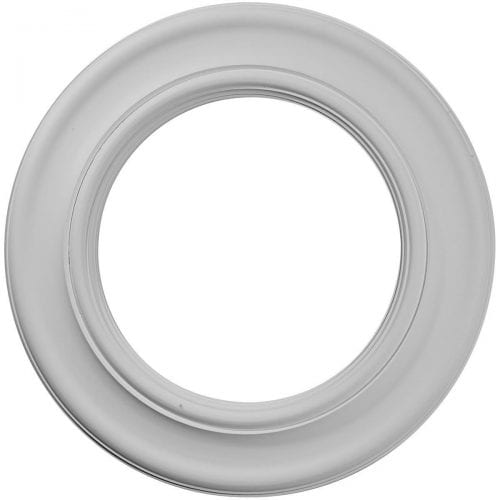 The largest medallion used is not currently available on amazon, but this is the information listed under our order history: 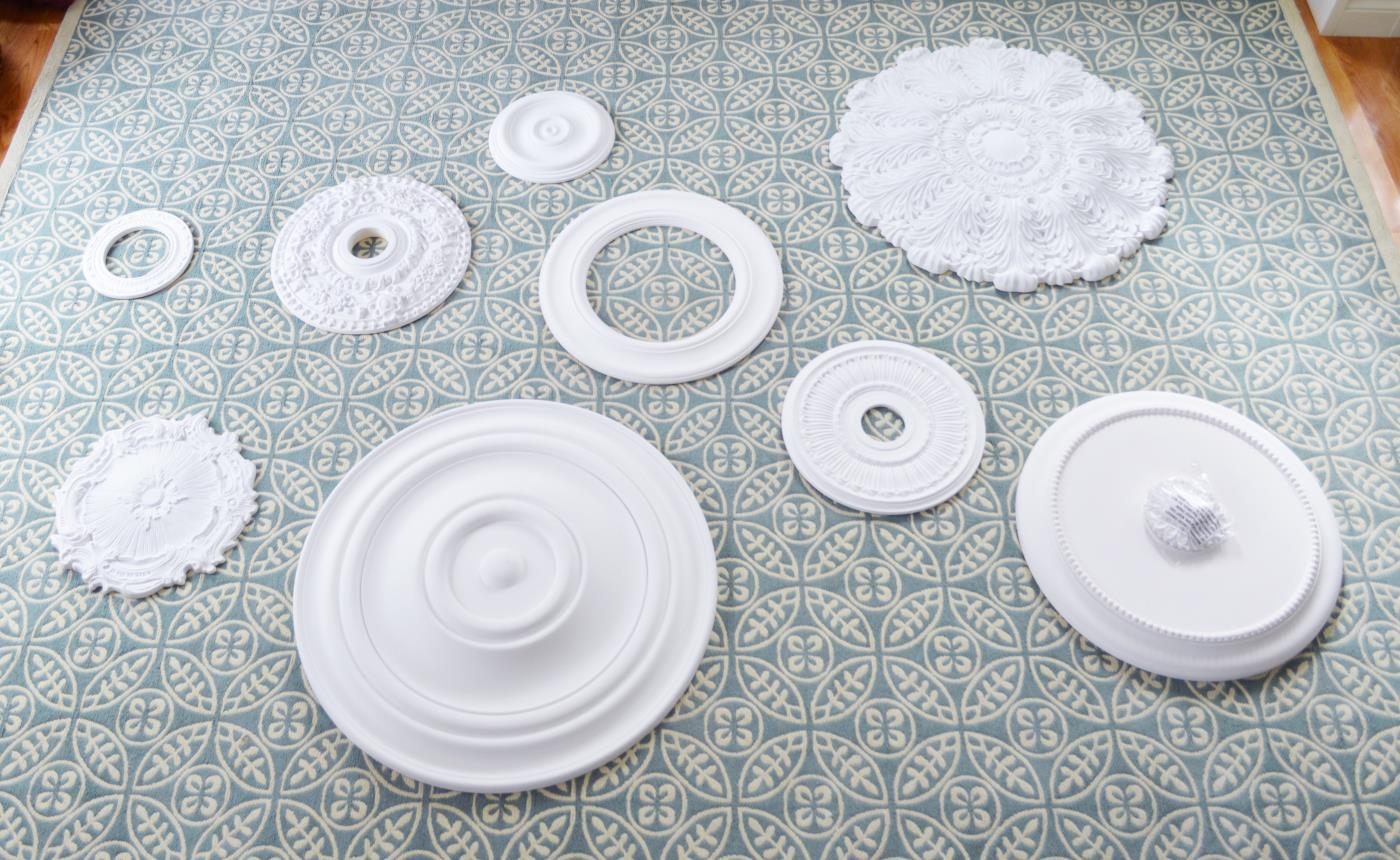 Once they had all arrived, we laid them out flat on the floor and played with the placement until we had a setup we were really happy with. Then I traced the size/shape, including cut outs, onto the back side of a roll of wrapping paper. I also numbered the back of each medallion and it’s corresponding paper cut out to help prevent mixing up similar sized pieces. I then tapped them in the same general spacing and layout to the wall. We looked at that for a few days and adjusted as needed before hanging them. 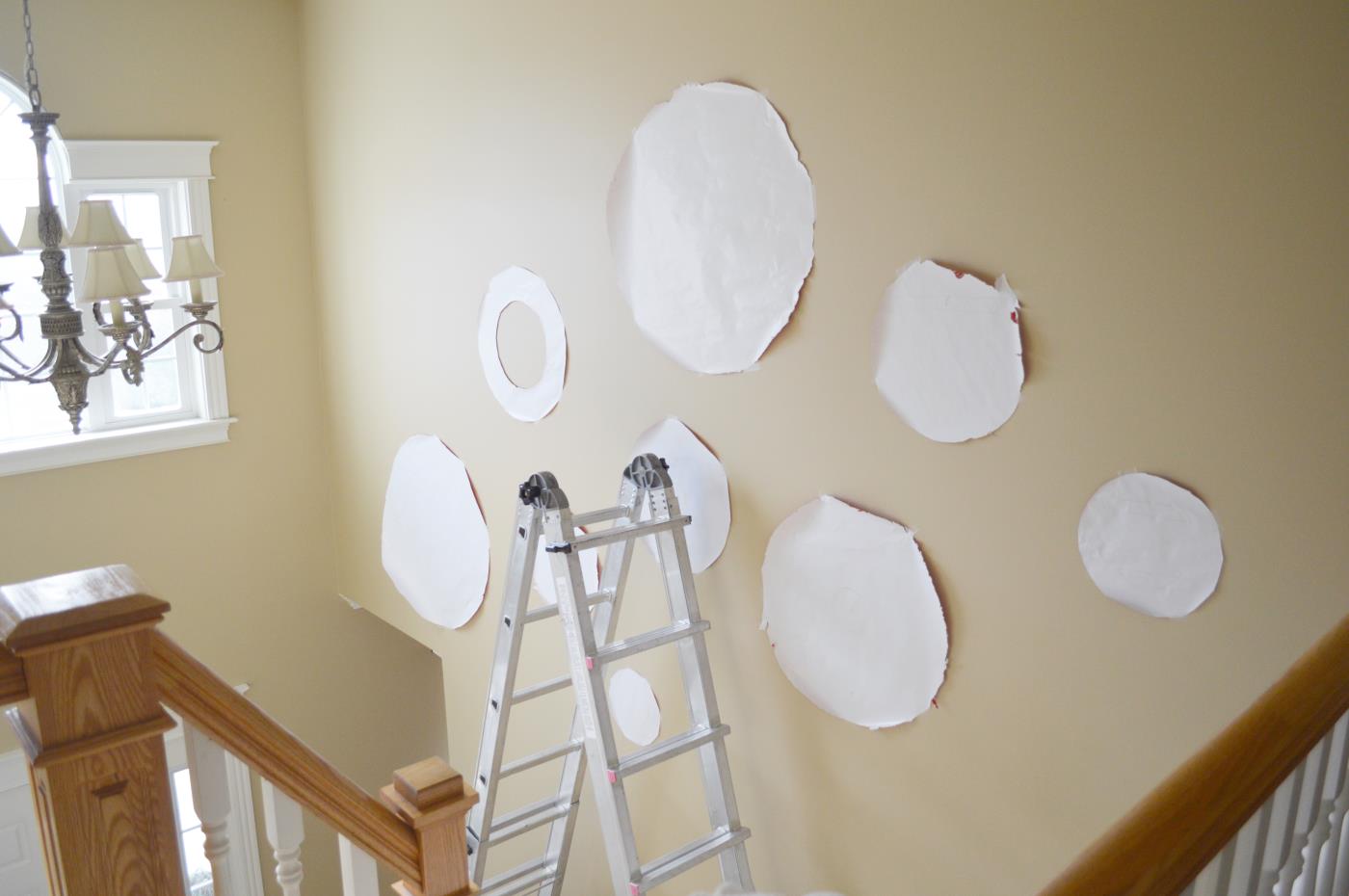 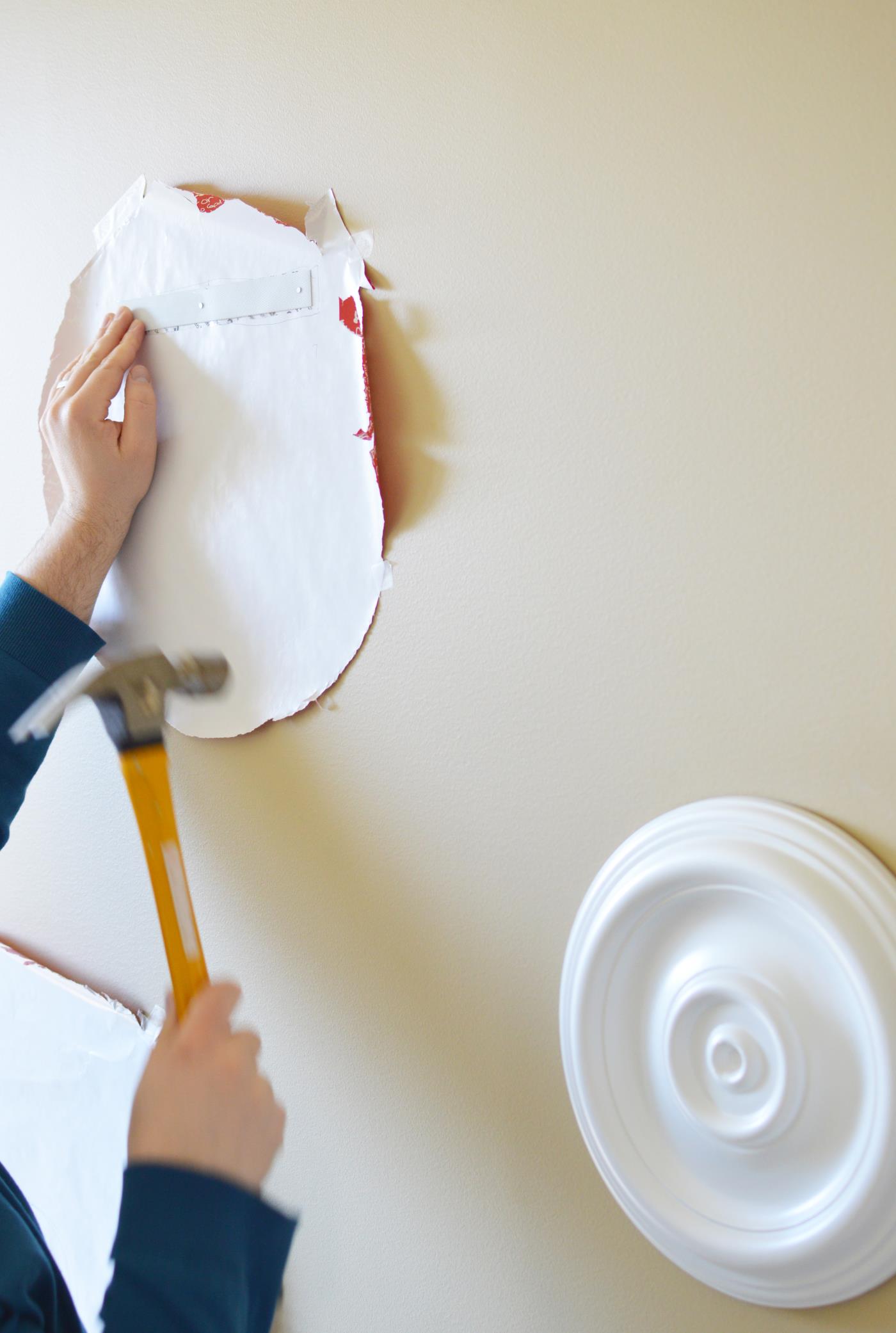 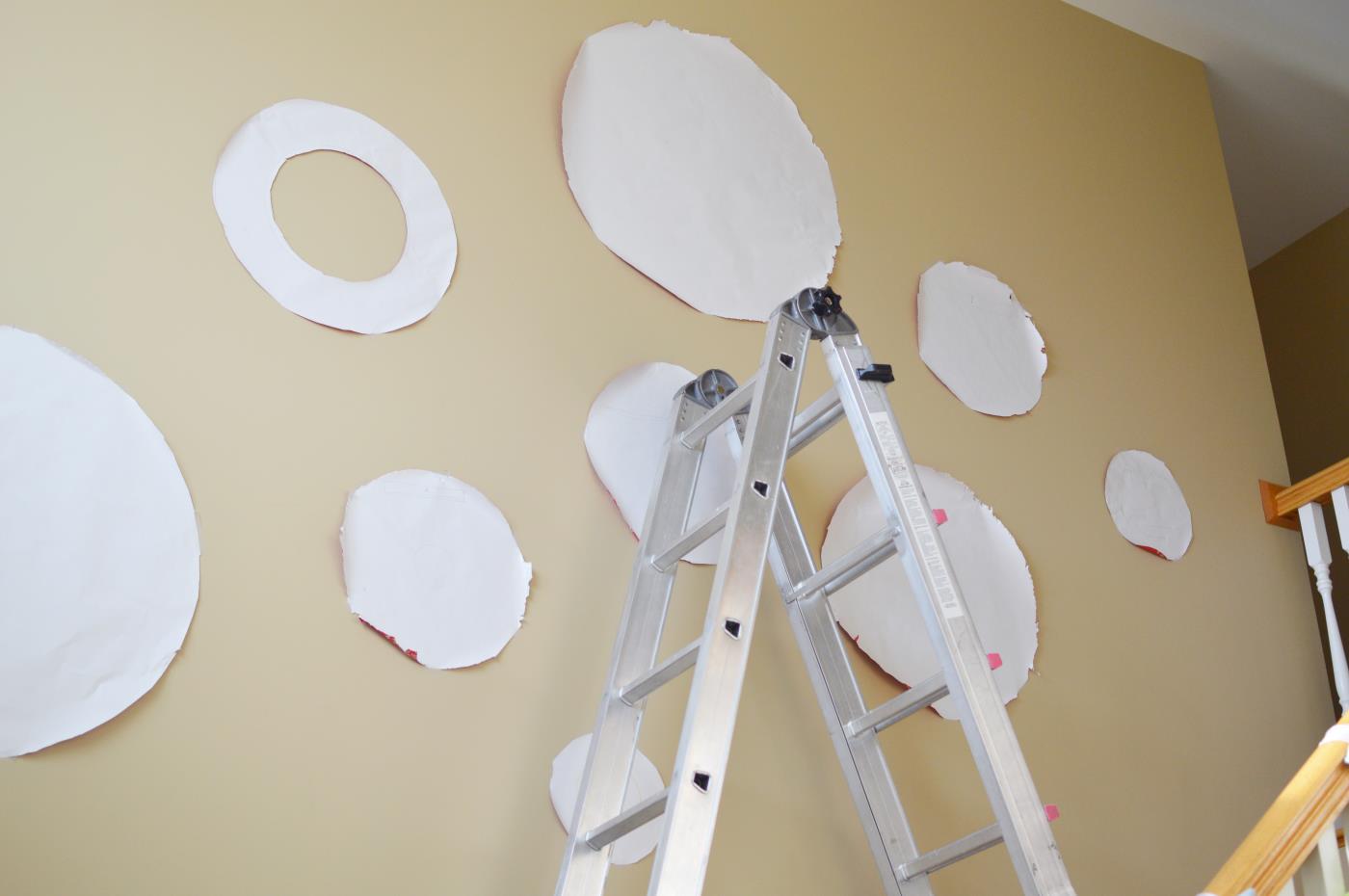 While we were reviewing the layout, I sprayed a light opaque ivory shimmer coat of spray paint over some of them to give even more depth to the mix. I also attached the two sides of the Velcro (hooks and then loops) together, then measured and cut the strips to fit each individual medallion. I attached the Velcro to the back of the medallions and pressed firmly to make sure it was secure. You may need to carefully trim a little with a razor blade or something similar to remove any Velcro that shows on the edges. 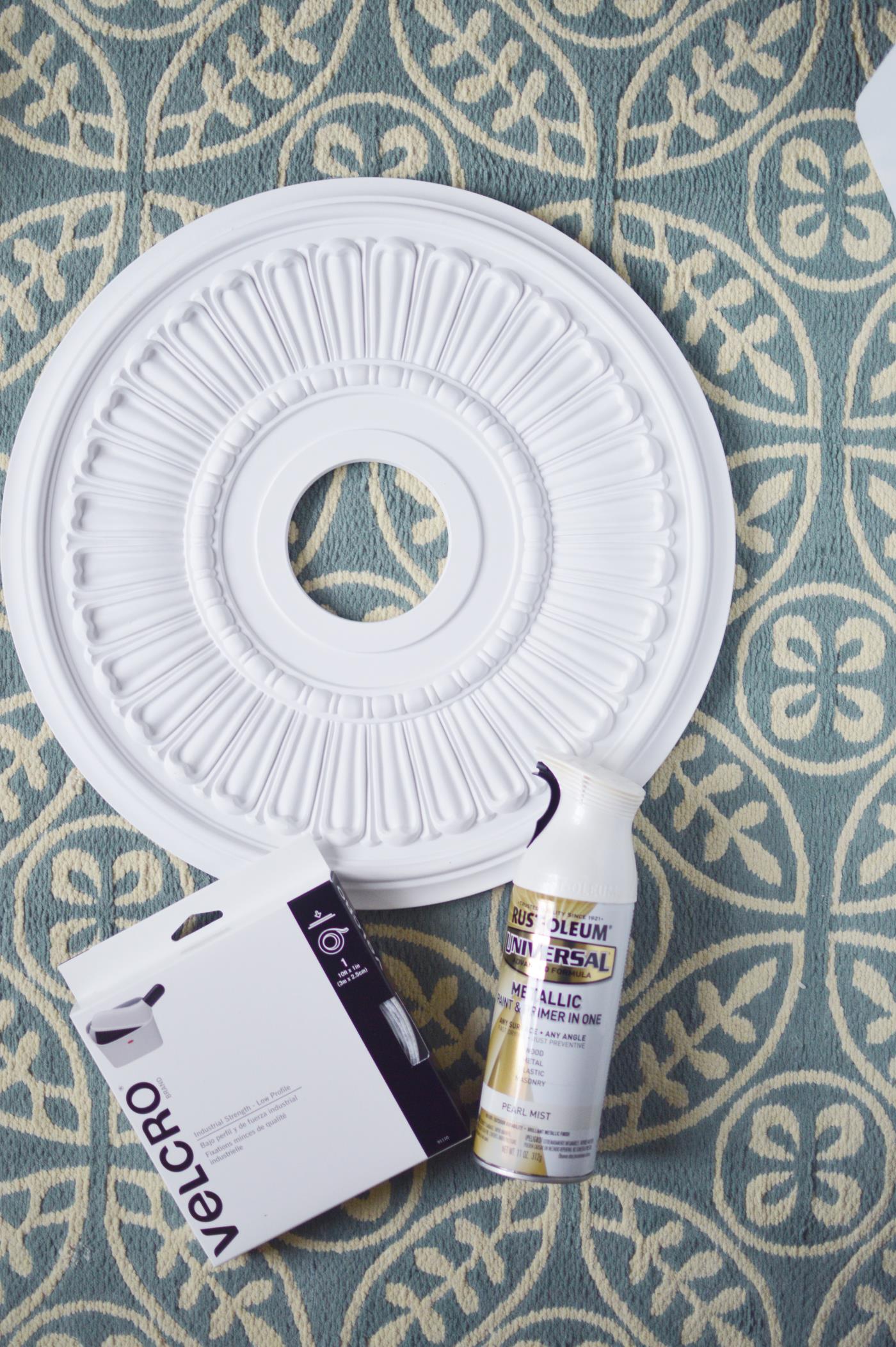 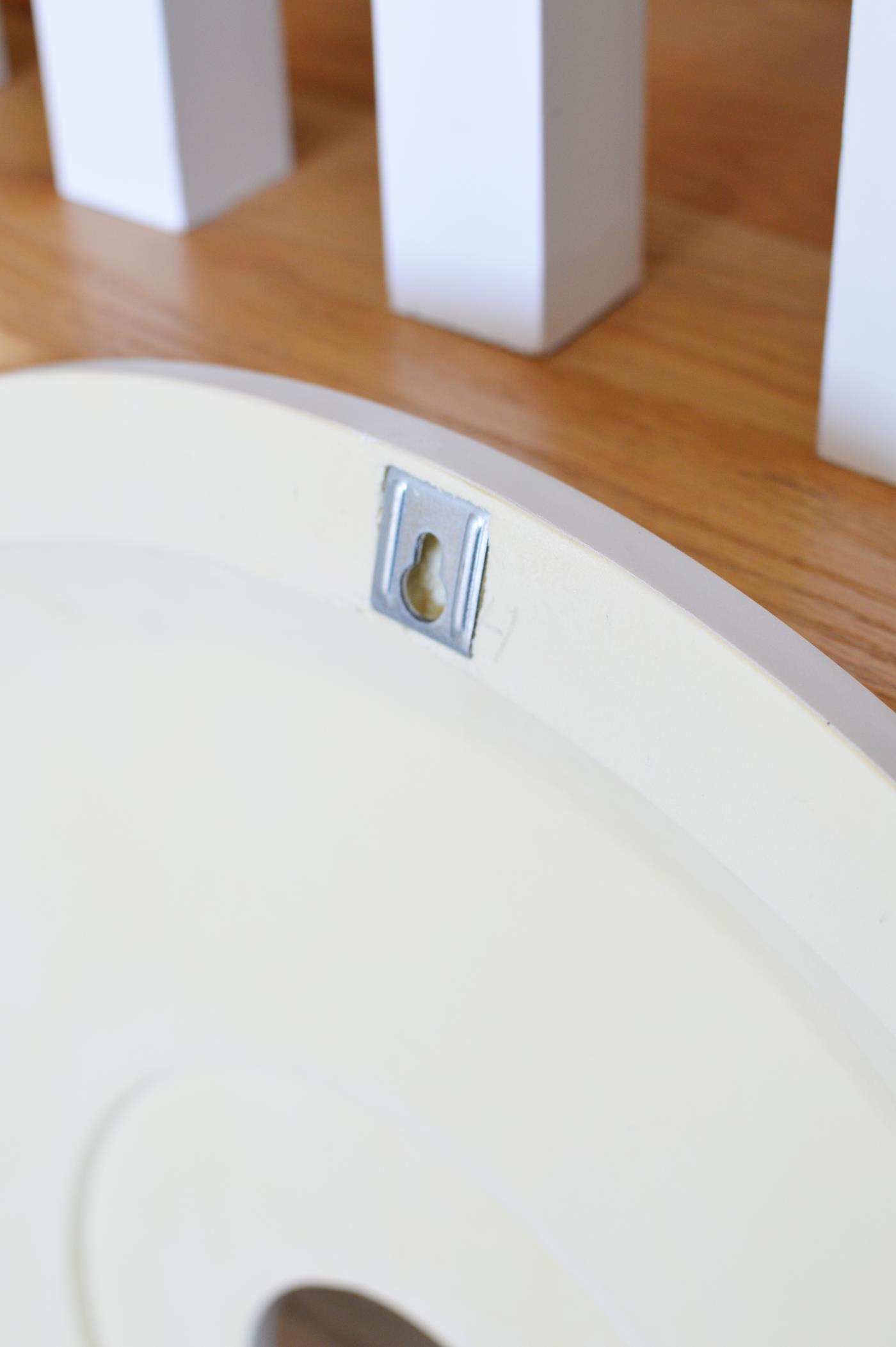 When we were ready to set the medallions I simply pulled the plastic strip off the other piece of Velcro that needed to go on the wall and I pressed firmly to the wall. We nailed/screwed the two that needed a little extra help and have simply enjoyed this new feature wall since then. It has now been 10 months since we completed the project and we have not had any issue with the Velcro holding to the back of the medallions or to the Velcro attached to the wall.

I’ll also mention this section of the wall does receive afternoon sun that heats up the wall quite a bit and no melting or sliding of the adhesive on the wall. That said, all walls, surfaces, paints and textures are different, so you may want to test one medallion with the Velcro, nail through the Velcro as we did with just the heaviest one or simply nail all of them, this depends on what you are most comfortable with. 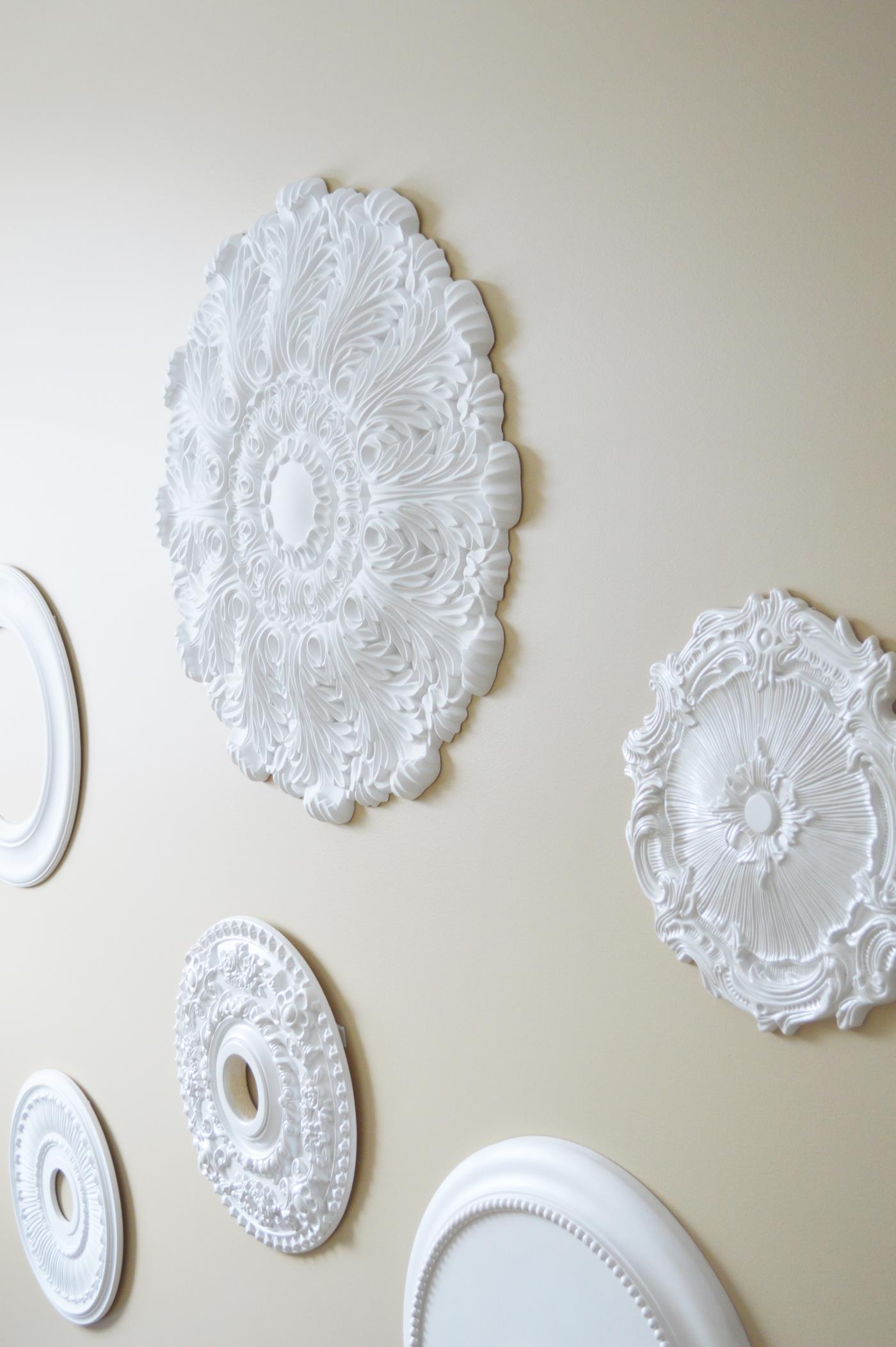 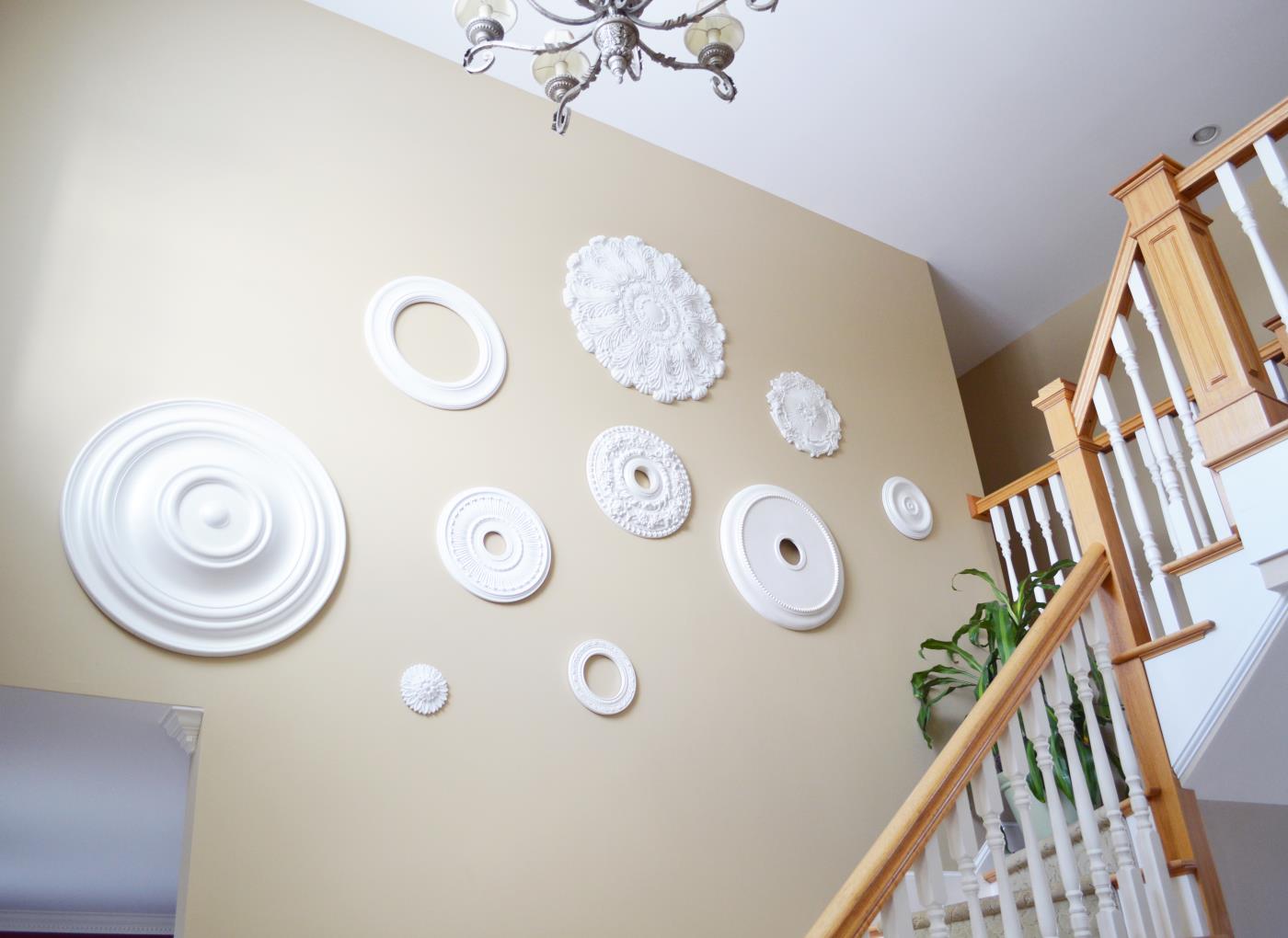 « Previous PostRock out with Google Chromecast Audio from BestBuy 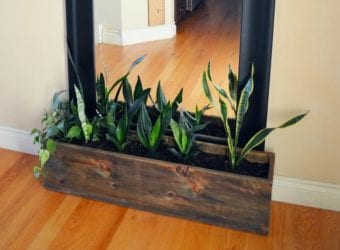 DIY Rectangle Wood Planter Box When it comes to diy planter box designs, then I go for all wood. In fact, I used all scrap wood for the planter in this post which makes...

END_OF_DOCUMENT_TOKEN_TO_BE_REPLACED 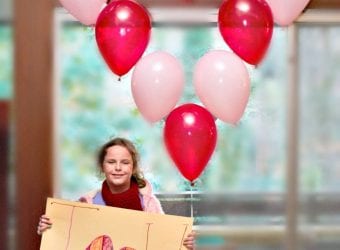 5 Ways to Say I Love You on Valentine’s Day

END_OF_DOCUMENT_TOKEN_TO_BE_REPLACED 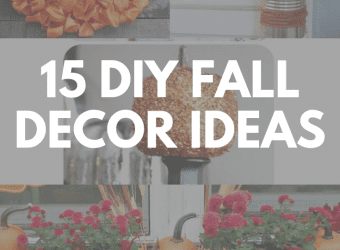 15 DIY Fall Decor Ideas Fall is here and that means it is time to decorate in fun fall colors. With fall comes cooler temperatures, the changing of leaves and a whole lot of...

END_OF_DOCUMENT_TOKEN_TO_BE_REPLACED 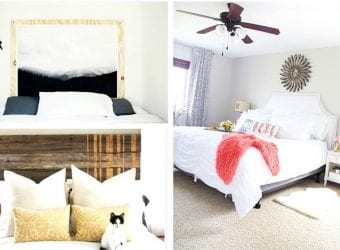 20 DIY Headboards I am all about making changes around my house. My favorite colors change or a new trend comes around that I love and I want to make things a little different...