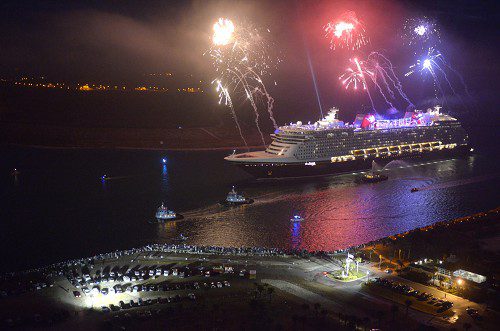 Fireworks light the morning sky as the Disney Dream cruise ship, Disney Cruise Line's newest addition to their fleet, arrives Jan. 4, 2011 for the first time to her home port of Port Canaveral, Fla. after traveling approximately 6,500 miles across the Atlantic Ocean from Bremerhaven, Germany.

The Disney Dream cruise ship will welcome guests on her maiden voyage on Jan. 26, 2011, and is scheduled to sail three-, four- and five-night cruises to the Bahamas and Disney’s private island Castaway Cay, from Port Canaveral.

Check out my other posts about the fabulous Disney Dream cruise ship setting sail on its maiden voyage on January 26, 2011:

Inside the Disney Dream: Theaters and Stage shows (sneak peek)

Behind the Scenes with Walt Disney Imagineers Aboard the Disney Dream

Virtual Porthole Aboard the Disney Dream from Disney Cruise Line

Next Post »Zulily – Deals on Clothes for Your Children

END_OF_DOCUMENT_TOKEN_TO_BE_REPLACED

About a month ago, I was thrilled to be asked to travel aboard the Disney Wonder and while this is the first of many posts, I have to say the ship was amazing!! I...

END_OF_DOCUMENT_TOKEN_TO_BE_REPLACED 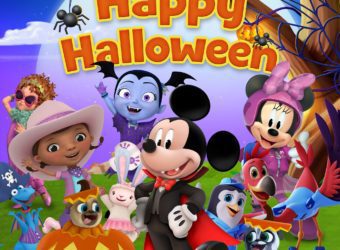 Disney Junior Boo For You Halloween

Disney Junior Boo For You Halloween My youngest daughter loves Disney Junior. She has been planning her Halloween costume for months. We were excited to head to Walmart to purchase her the most perfect...

END_OF_DOCUMENT_TOKEN_TO_BE_REPLACED When Will Disneyland Reopen? The Battle Rages On Disneyland is still closed. It was one of the last theme parks to shut down worldwide and Governor Newsom won't let them open. Although according to...