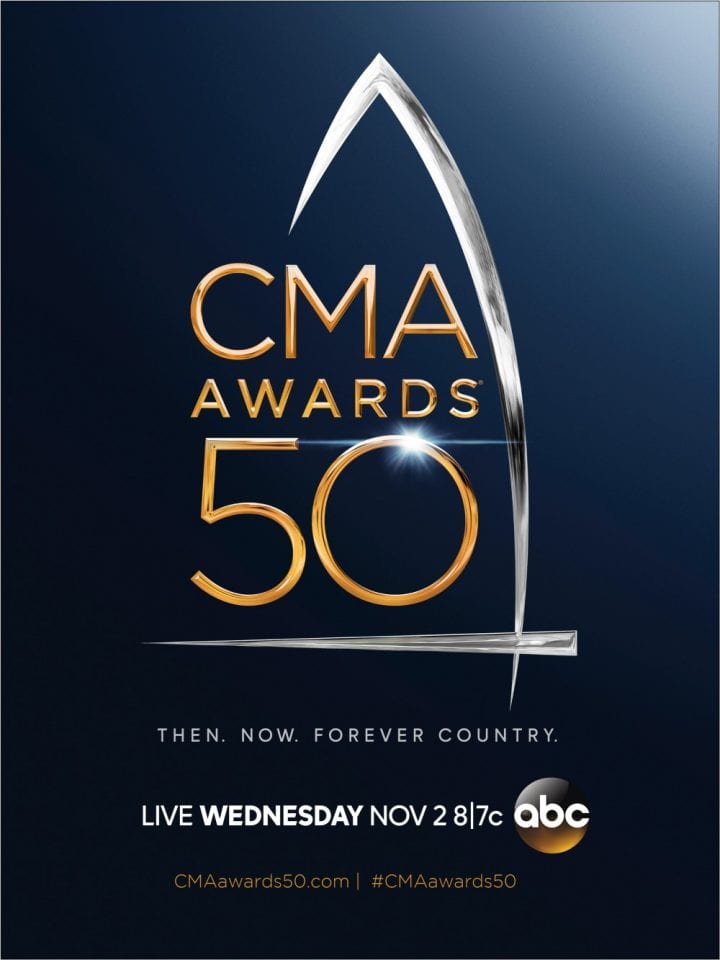 Who along with me is getting excited about the 50th Annual AT&T CMA Awards Red Carpet show?  It airs live on Wednesday, Nov. 2, at 8|7c on ABC-TV.  Country superstars Brad Paisley and Carrie Underwood preside over the evening, returning as hosts for Country Music’s Biggest Night. The 2016 event promises spectacle, accolades and countless special moments as we celebrate the 50th anniversary of the CMA Awards.

The show will be hosted by Bobby Bones, host of iHeartRadio’s nationally syndicated radio program The Bobby Bones Show. In addition, Chris Janson will perform during the Red Carpet broadcast. Janson’s “Buy Me A Boat” was named Country Song of the Year at the iHeartRadio Music Awards in May.

Tim McGraw, a 38-time CMA Awards nominee, received three nominations this year including Male Vocalist; and Single and Music Video of the Year for “Humble and Kind.” McGraw only receives one nomination for Single of the Year, but can receive an additional trophy as producer.  If he doesn’t win, the show is rigged – that is all.  Okay, maybe not rigged because of all of the awesome country music talent out there today – but I sure hope he does win!

One of my favorites – Kenny Chesney – is set to receive a CMA Pinnacle Award during the show.  He definitely deserves this award with all of his wonderful music that he has shared with us during his career so far.

We will be watching it live and hosting a view partying during the show.  Follow along with me to catch all of the action and highlights of the evening!

This post is part of a partnership with AT&T.

« Previous PostShare a cup and a story this Veteran’s Day

Are you shopping the deals this Black Friday? If Toys R Us is on your list, then check out this post. We have found comparable items on Amazon. Toys R Us Black Friday Ad...

END_OF_DOCUMENT_TOKEN_TO_BE_REPLACED

If I invite you to an event on Facebook to “Stop the Incessant Facebook Spam Events,” would you attend? Mark it as Spam? Or would you invite 3,248,079 of your closest friends to join...

END_OF_DOCUMENT_TOKEN_TO_BE_REPLACED

The incredible egg is a great source of protein and vitamin D. Great-tasting Horizon Organic® eggs come from cage-free hens that have the freedom to roam. They eat fresh 100% organic vegetarian feed and,...

END_OF_DOCUMENT_TOKEN_TO_BE_REPLACED

Thanks to the awesome deals that I keep finding at Groupon, I was able to score a boat rental. Here are some pictures from our experience: