Father of 30 Wants a Break on Paying Child Support

Every once in a while there is just something on the news that stuns me. It doesn’t happen often but it does happen. This is one of those stories.

Desmond Hatchett of Knoxville, Tennessee is a father who can no longer pay or wants some relief when it comes to making his child support payment. Desmond is the father of 30 children, ranging in age up to 14.

There are 11 mothers who are the recipients of 50 percent of his earnings from his minimum wage job with the lowest amount paid starting at around $1.49 per month.

I am completely floored by the fact that this man has fathered and/or continued to father so many children without being able to support them. In fact, he fathered four children in one year. TWICE!

While the state cannot tell him to stop having kids and he has not broken any laws, what about the good of the children? Who will advocate for those kids?

WHAT SHOULD THE STATE OF TENNESSEE DO HERE? 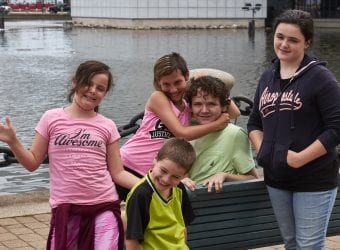 Raising Kids in the Instant Information Age Yesterday morning, while cooking eggs for breakfast, my youngest walked in with an odd expression on her face. It looked to me as though she had...

END_OF_DOCUMENT_TOKEN_TO_BE_REPLACED

What’s the Tooth Fairy’s Going Rate? Your child’s first tooth loss marks a critical milestone for them. It serves to remind you both that they’re growing up quickly, one that typically merits a small...

END_OF_DOCUMENT_TOKEN_TO_BE_REPLACED

I grew up in a military family. My dad is a retired colonel from the U.S. Army and I truly believe that serving in the military is an incredibly noble profession. I  was always...

END_OF_DOCUMENT_TOKEN_TO_BE_REPLACED

Who She Was Before She Was Babushka