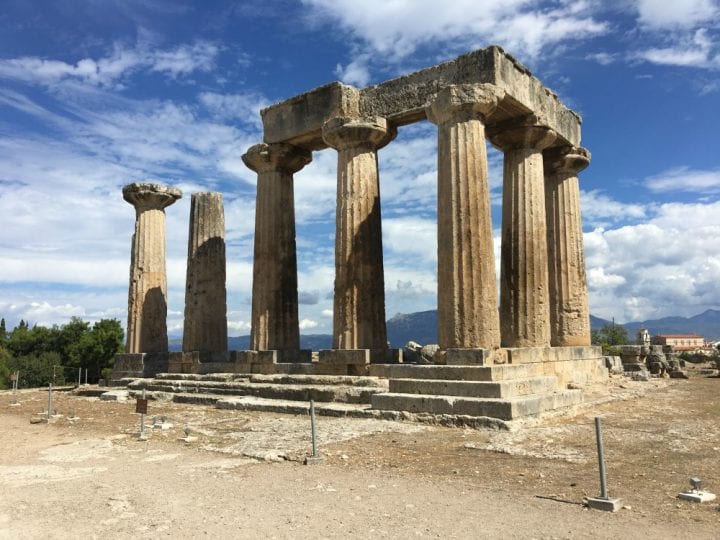 The historic city of Korinthos is situated on a stretch of land which connects the Peloponnese to mainland Greece. The modern community is also between Athens and Sparta. Archeological artifacts indicate the location has been inhabited since 6500 B.C. The name Korinthos is believed to have originated from the ancient Pelasgian language. We hope that you love our Visiting Korinthos Greece post. 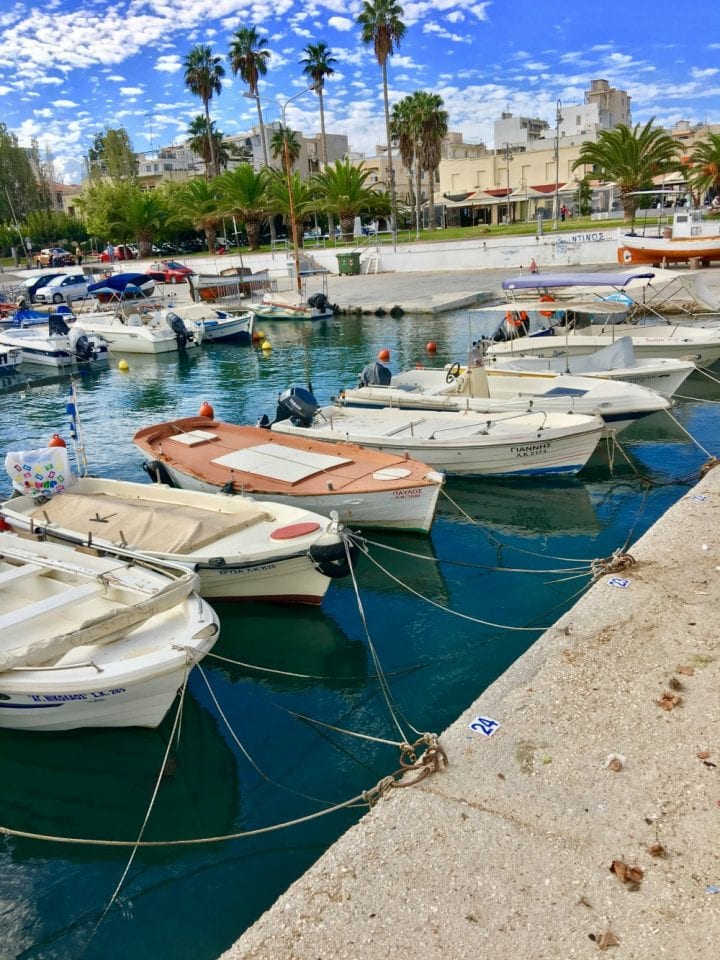 The city played a part in many historical and Greek mythological events. During the Trojan War, Korinthos Greece residents participated while they were under the rule of King Agamemnon. Corinth was also a major participant in the Peloponnesian War. By 200 B.C., Julius Caesar declared the city the capital of the providence. As the ancient city of Korinthos Greece grew, temples to the gods were constructed. By 730 B.C., the population was recorded as having 5,000 residents. Seventeen years later, the city eliminated rule by royal authority and established a government. 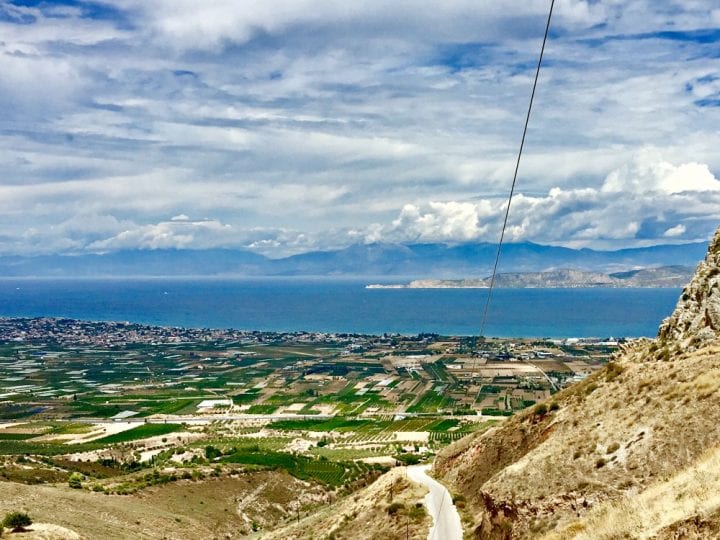 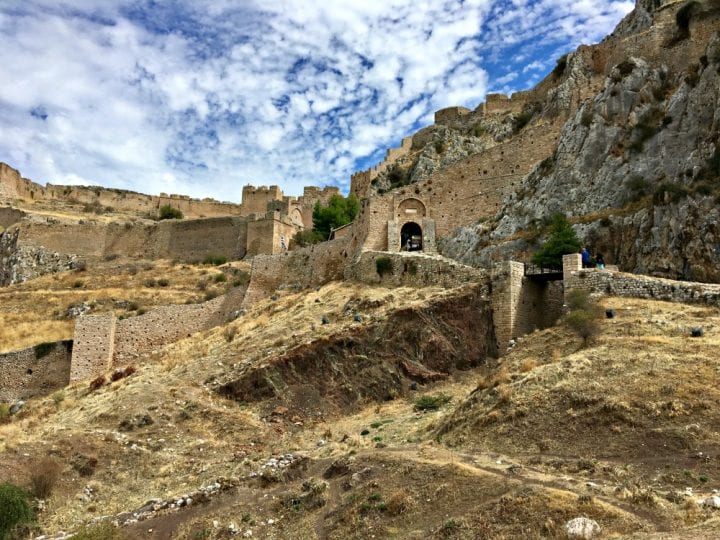 The Apostle Paul visited the city twice and lived here for nearly two years working as a tent maker and evangelizing. During his second visit in 58 A.D., he wrote Romans. Over the years, the city was invaded and conquered by many including the Spartans, Alexander the Great, French crusaders and the Ottomans. The Greek War of Independence occurred from 1821 to 1830, which destroyed much of the city. Two years later, the city gained its freedom and independence after the Treaty of London was established. Corinth was once again devastated by an earthquake in 1858. New Corinth Greece was reconstructed three kilometers from its original site, but also suffered damage during the 1928 earthquake. 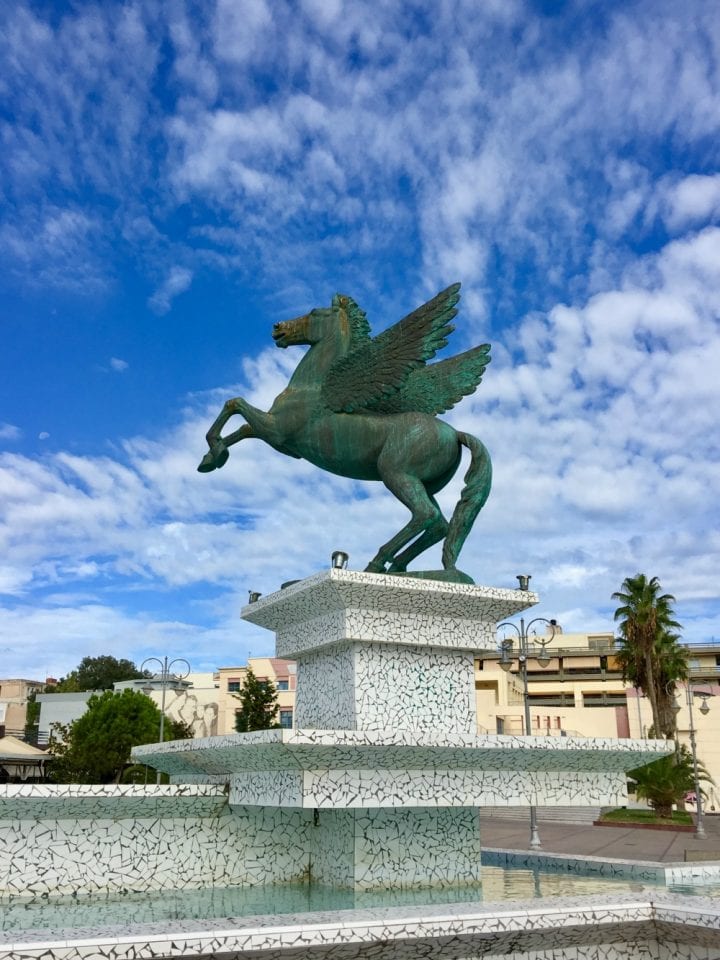 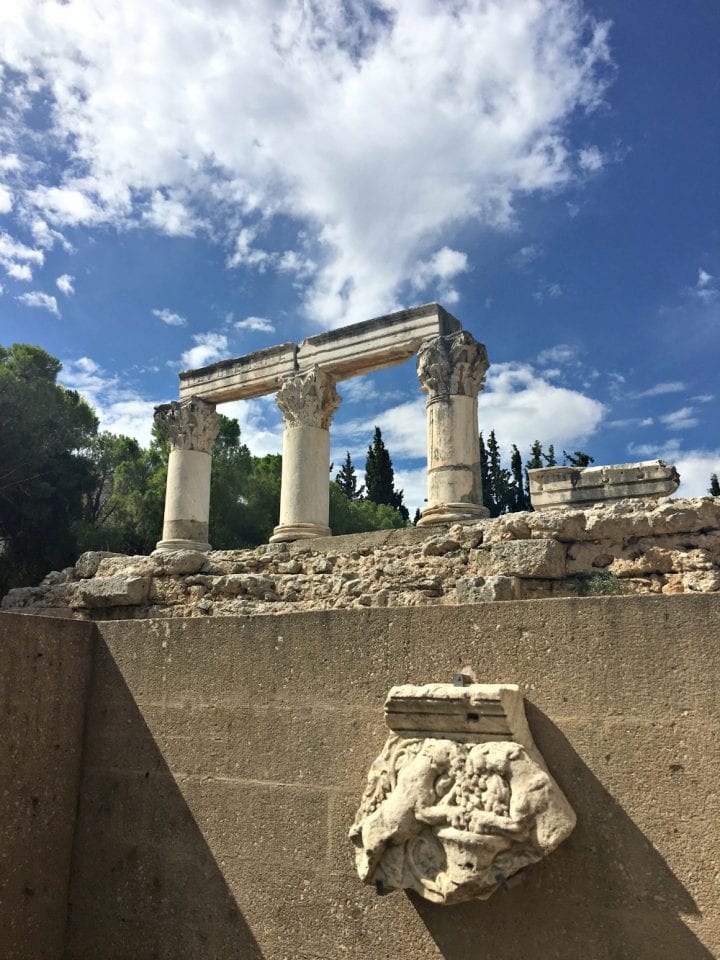 How to Get to Korinthos

Most people travel from Athens (80 KM away), it takes about 1h of driving. Renting a car a driving to Korinthos gives people the chance to see a lot more, most famous stop would be the Corinth Canal. With Rentagile.com, you can rent a car from Athens for an average of 4.5 Euros/day – 31 Euros for an entire week.

Today, the capital city serves as the heart of culture and finance. Visitors find modern roads and parks along with historic squares and a beautiful seaport. Stroll along the walkways and stop at one of many cafes or go shopping. In El Venizelos Square stands a majestic statue of Pegasus. The expansive Kalamia beach is part of the Corinthian Riviera and features a number of coffee shops and restaurants. Within close proximity is the Church of Saint Paul where the Apostle provided instruction and gave lectures. Corinth Greece and the surrounding area also feature a number of historic locations, museums and monuments.

We had the opportunity to visit the  Monastery of Holy Cross which is a working dairy farm and were given a personal tour of the Korinthos Church of Apostolos Paul. 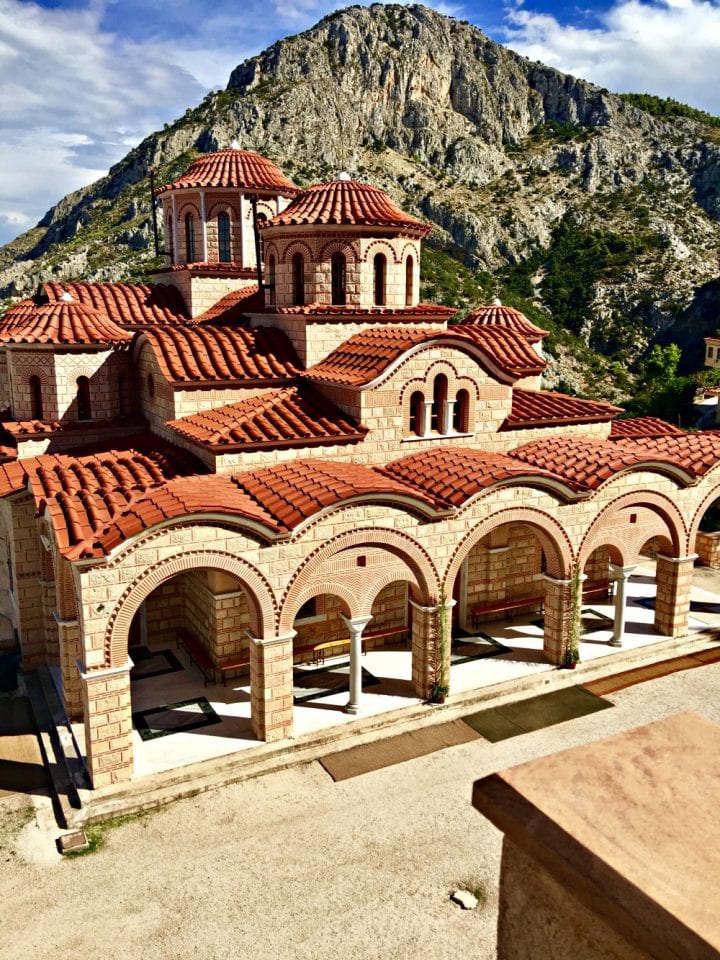 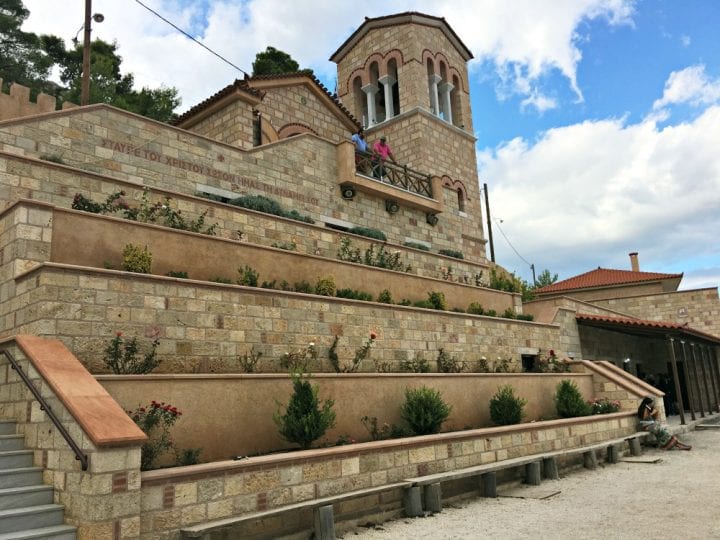 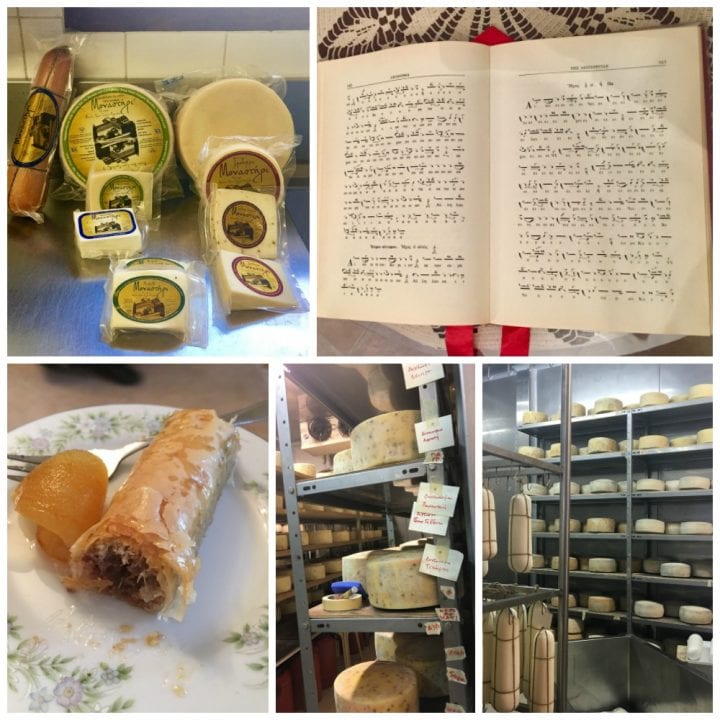 The Acropolis rises high above the city and is the oldest and largest fortress in the region. Here, visitors have the chance to see what remains of the Temple of Aphrodite. Only a fraction of the original Doric columns remain on the Temple of Apollo, which is considered the oldest in Greece. Other ruins include the Temple of Octavia. The Asklepieion commemorates the god of healing and features a smaller temple, a courtyard and several dining areas. The Archaeological Museum houses a number of artifacts having religious significance. 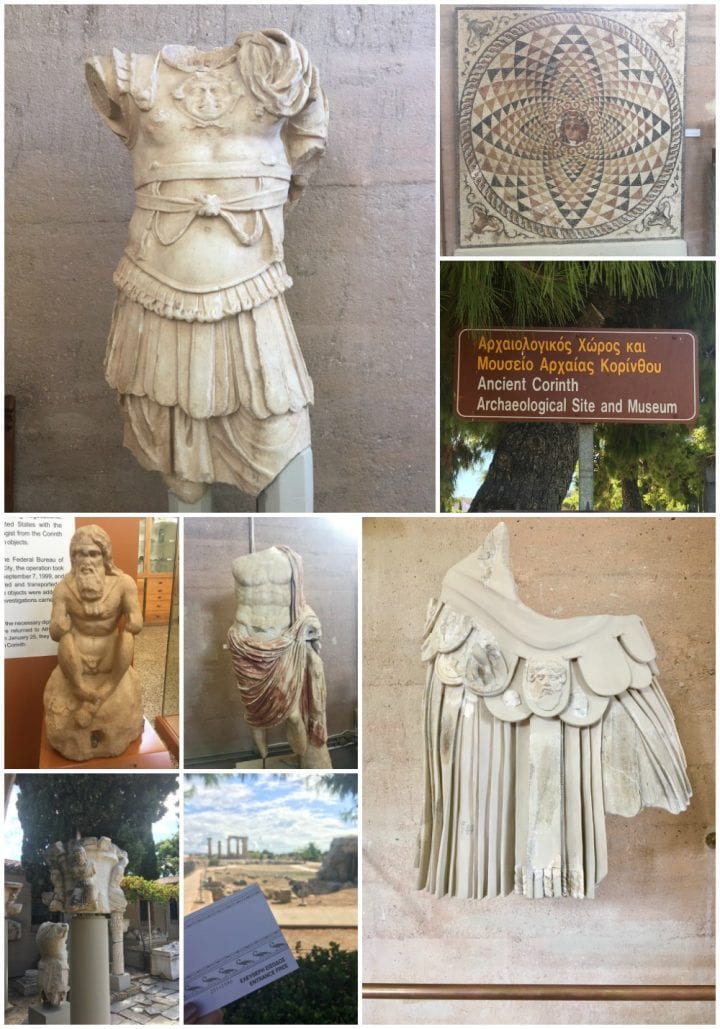 The town lies a few miles from the metropolis and is famous for producing bottled spring water. It is also considered part of the Corinthian Riviera. The Casino Hotel is a popular resort site for gamblers. The property has an ancient olive grove in addition to a picturesque pool complete with waterways, which meander through scenic gardens. 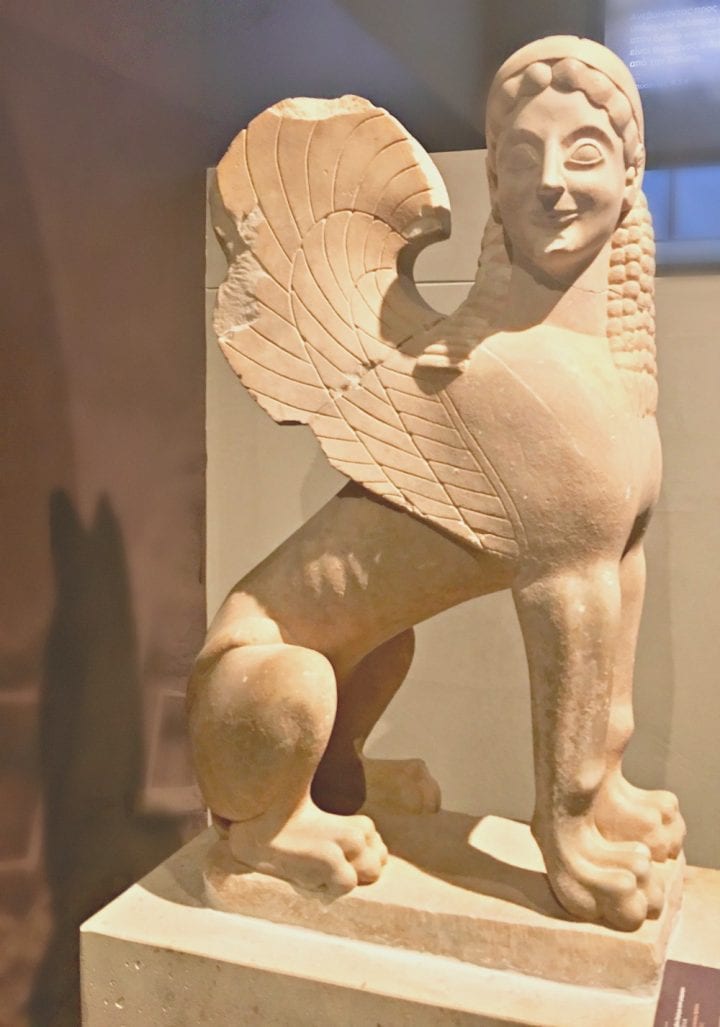 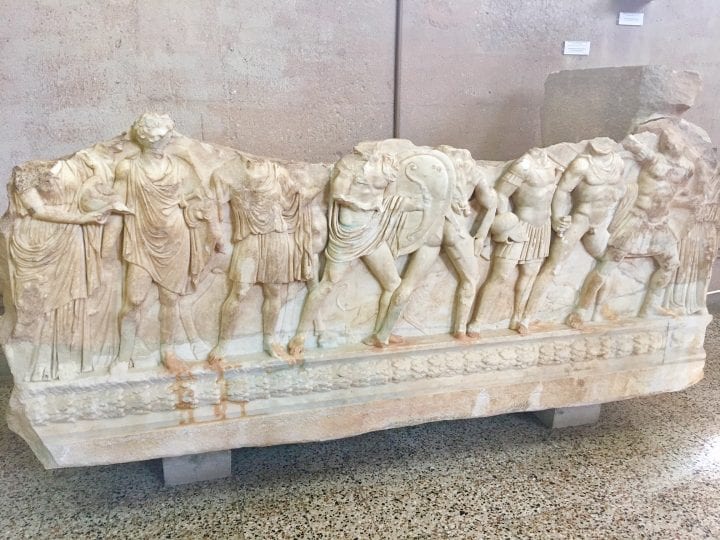 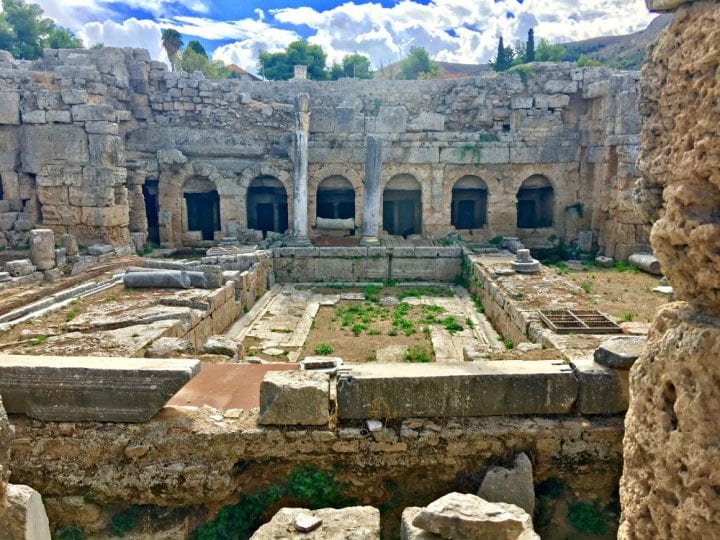 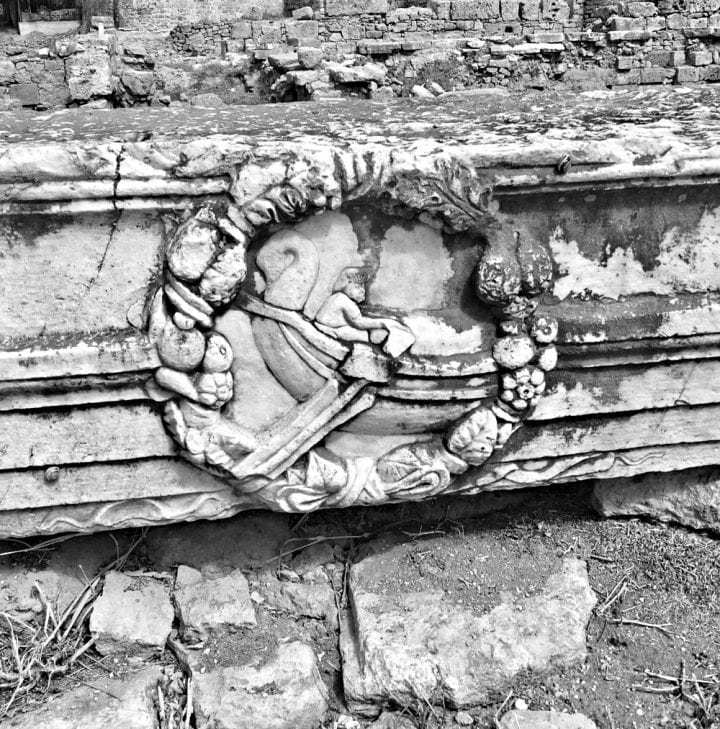 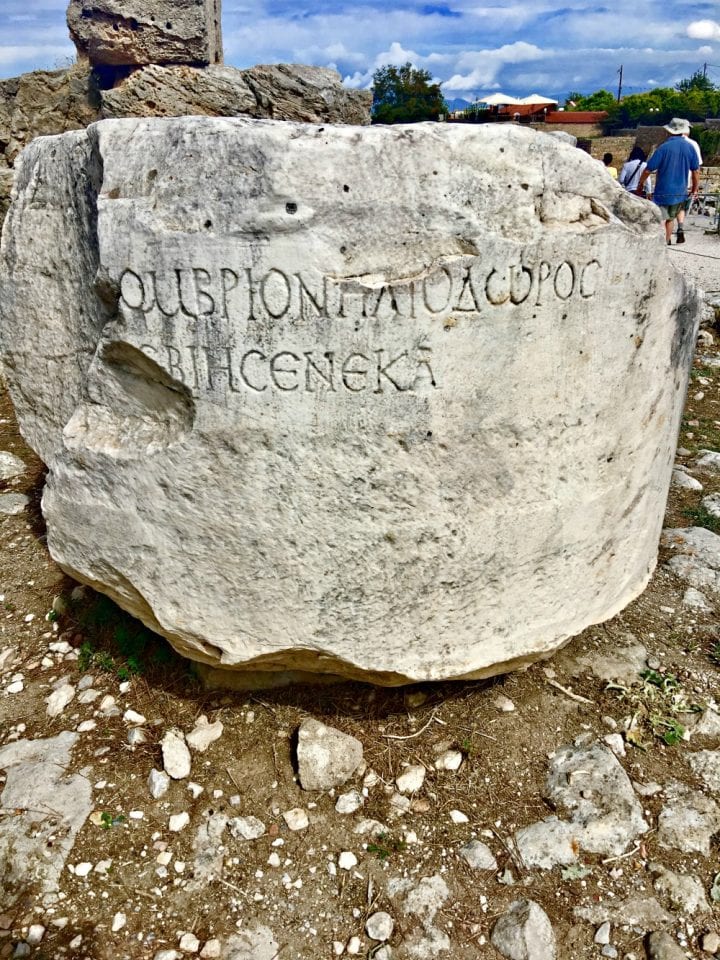 The community was renowned for hosting games in honor of Zeus. The remains of the temple dedicated to the Greek god remain today. The area is also noted as being wine country. Many vineyards and wineries welcome guests for tours and wine tasting.

The city features massive stone walls, which once protected the palace of Agamemnon. King Agememnon was the brother of King Menelaous who was wed to Helen. She was taken by Paris to Troy and the battle to win her back began. The area is of great archaeological importance and additionally features a number of hotels and restaurants.

The town is considered one of the most beautiful ports in Greece and boasts Venetian houses, expansive mansions along with the Akronafplia, the Bourtzi and the Palamidi fortresses. The picturesque community boasts cafes, outdoor theatres and waterfront restaurants. Nafplio also hosts a folk music festival toward the end of each May. The spectacular 4th century B.C. Epidaurus Theatre lies 24 miles from here and continues hosting live performances. 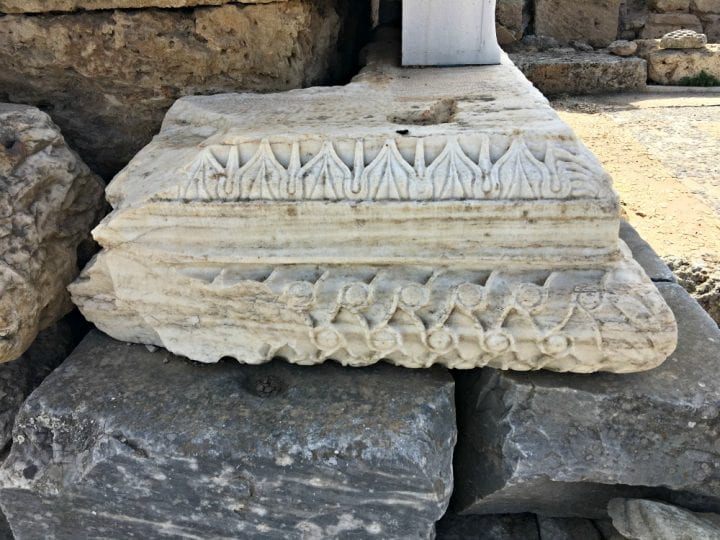 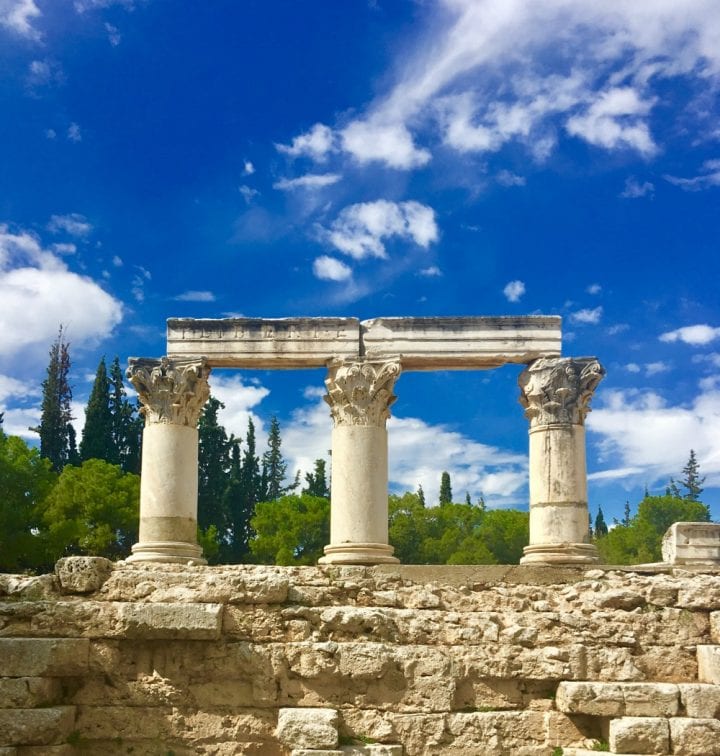 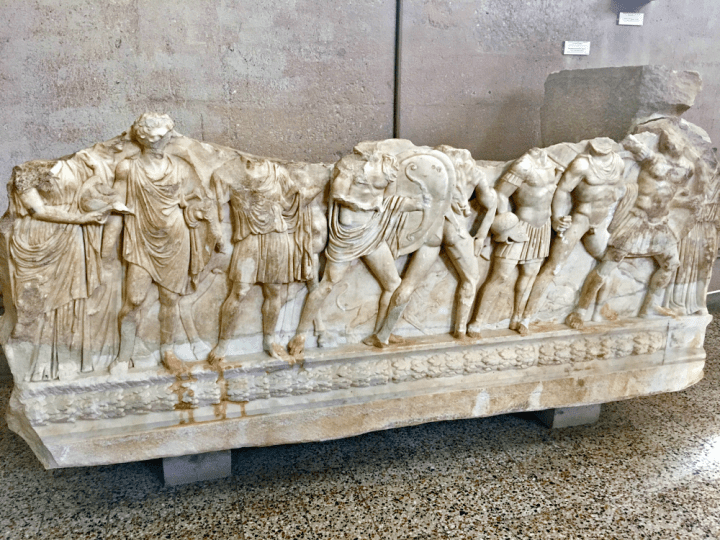 Hotel Ephira was a typical Greece hotel in that free breakfast was offered. The hotel has been operating at the gate of the Peloponnese, in the city center of Corinth, since 1970. 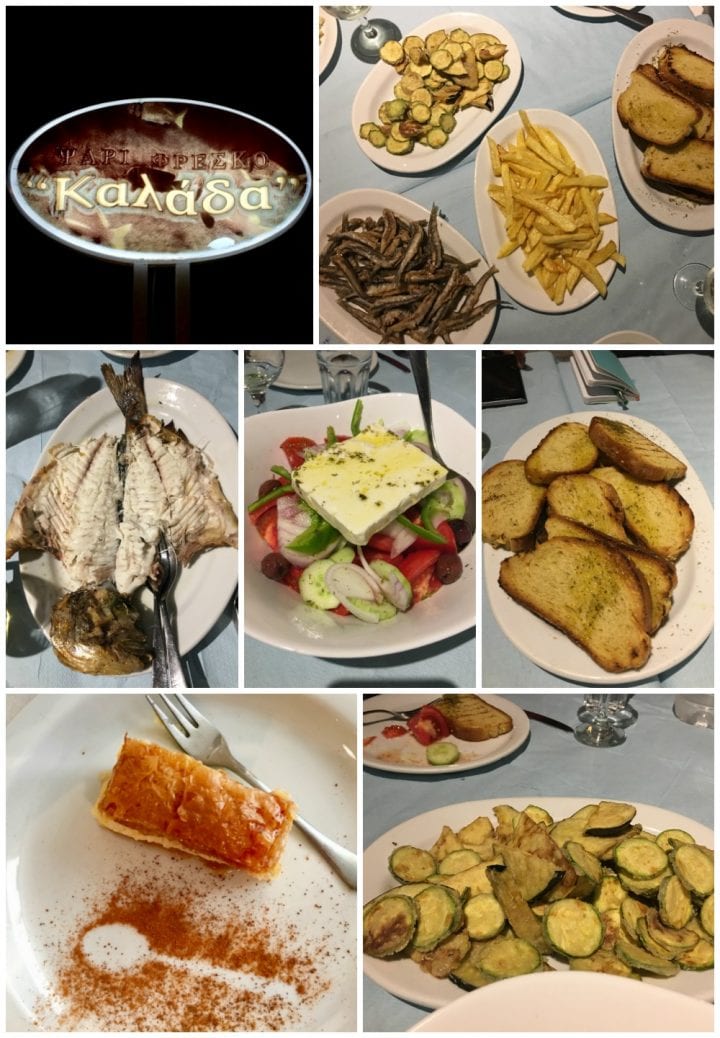 The ancient people of the metropolis and the country contributed much to promote modern civilization. They were the first to develop scientific theories and promoted the fine arts. Along with constructing impressive architectural structures, local citizens also established the foundation of democracy. Spectacular scenery along with a wealth of culture, tradition and history await all who venture to the capital city. Whether a fan of exotic locations, biblical history, Greek mythology or fascinating archaeology, Corinth is a must-see destination. 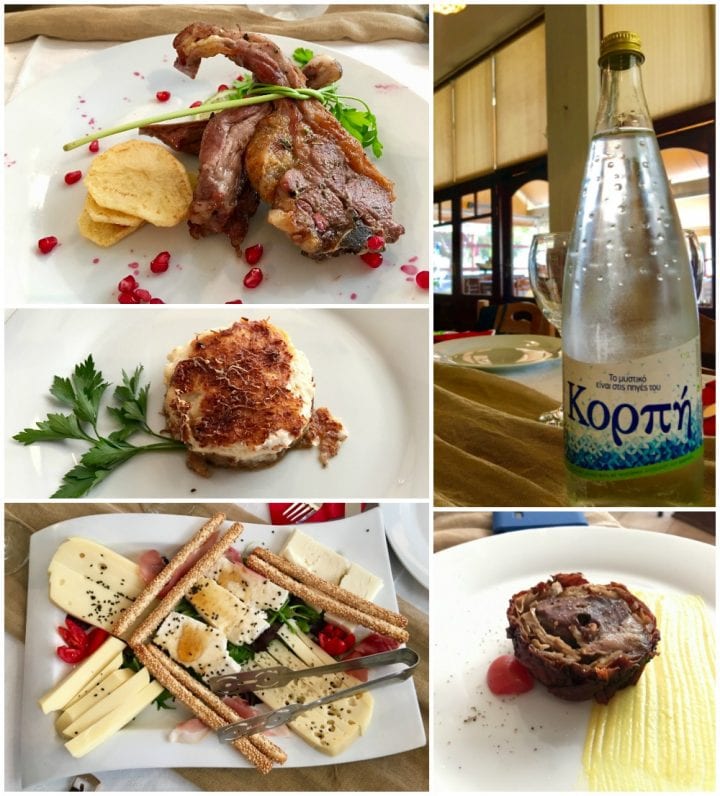 I was part of the IFWTWA Corinthian Riviera Media Trip. #IFWTWACorinthianRiviera All food, travel within Greece and accommodations were sponsored.

If you follow me on social media then you know that I just got back from a short vacation in Puerto Rico. This is my first visit to PR. I have been there twice...

END_OF_DOCUMENT_TOKEN_TO_BE_REPLACED 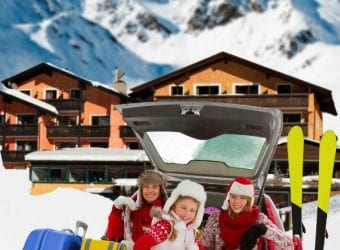 6 Tips for Less Stressful Holiday Travel Many families find themselves traveling during the holidays each year. Statistics so that more and more people are driving or flying 50+ miles to spend time with...

END_OF_DOCUMENT_TOKEN_TO_BE_REPLACED 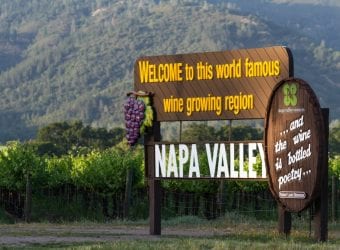 5 Must Visit Wineries Napa Valley California Napa Valley in California is considered the best wine making region in the United States and among the top 10 on the planet. The Mediterranean like climate...